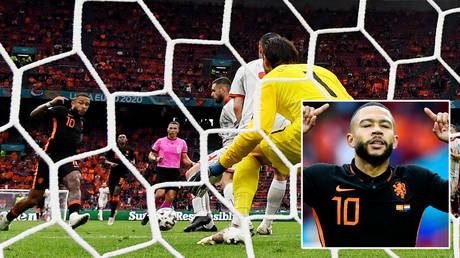 Already eliminated before kick off, tournament newcomers North Macedonia almost sprang a shock as they took on the group winners in Amsterdam, Ivan Trichkovski slotting beyond Maarten Stekelenberg after ten minutes, only to see his effort disallowed by the slenderest of offside calls.

If the underdogs sensed their luck was out at that point, there was more to come. Aleksander Trajkovski smashed a shot against a post shortly after the 20-minute mark, and Memphis Depay’s finish from a Netherlands counter-attack survived a VAR check for a potential foul in the build-up.

No team have scored more goals than #NED at @Euro2020 🔥 @GWijnaldum strokes home his nation’s second of the game – and seventh of the group stage ⚽️⚽️⚽️⚽️⚽️⚽️⚽️#MKDNED | #ITVFootball | #Euro2020 pic.twitter.com/csgc9P7ilc

PSV prospect Donyell Malen regularly tormented the Macedonians, although it took until six minutes after the break for the Netherlands to extend their lead, when Wijnaldum netted from close range, latching on to a Depay ball from the left.

That drew the former Liverpool midfielder level with one of the greatest Oranje players of all time in Van Basten, and it wasn’t long before the marauding midfielder beat the icon’s record, gratefully accepting the rebound from a Depay shot that goalkeeper Stole Dimitrievski could not contain.

🇳🇱 Selected scorers for the Netherlands:

Unfortunate North Macedonia had another goal ruled out for offside inside the final 20 minutes, departing with respectability after giving their significantly higher-ranked opponents a fright either side of their goals.

Frank de Boer’s side topped the group with a third victory and will now wait to discover their round of 16 opponents.

‘You would never say this to a man’: Golf babe Spiranac rows over DeChambeau as Rahm returns from Covid heartbreak to win US Open