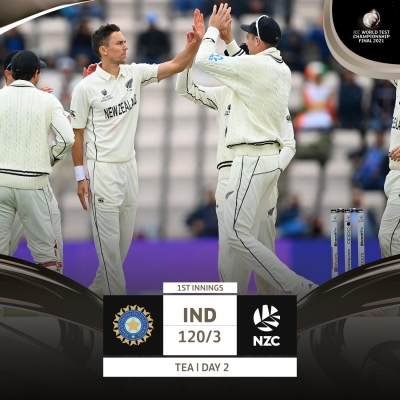 SOUTHAMPTON, June 19 : India were 120/3 when they were forced to take an early tea break due to poor visibility here on the second day of the World Test Championship final against New Zealand at the Hampshire Bowl.

India captain Virat Kohli was unbeaten on 35 off 94 deliveries while his deputy Ajinkya Rahane was on 13 off 54 deliveries as they battled it out against a disciplined New Zealand, who had won the toss and elected to bowl.

Openers Rohit Sharma (34 off 68 balls) and Shubman Gill (28 off 64 balls) had provided a solid start of 62 in 20 overs as New Zealand bowlers struggled for the ideal line early on.

But then Kyle Jamieson provided the breakthrough on the first ball of his sixth over, having Sharma caught at third slip.

Post-lunch, Cheteshwar Pujara’s ordeal came to an end as he was adjudged leg before wicket to a Trent Boult delivery that came back in. The India No.3 made eight of 54 balls.

The first day was washed by rain out on Friday.

The post WTC final: Kohli holds on as India reach 120/3 at tea on Day 2 appeared first on The Shillong Times.

Daily stress may put you at heart disease, stroke risk:…