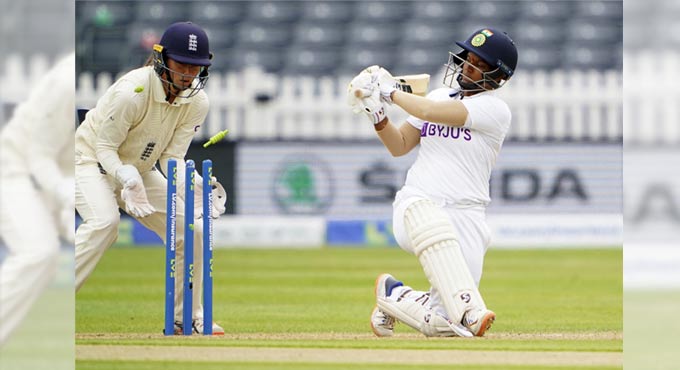 Bristol: Indian women suffered yet another batting collapse before their lower-order lifted them to 243 for 8 at tea as the one-off Test against England headed for a tense finish here on Saturday.

India lost four quick wickets for 28 runs after lunch but debutant Sneh Rana (27 not out) and veteran Shikha Pandey (18) kept the visitors afloat with a crucial 41-run partnership for the eighth wicket.

Resuming the second innings at 83 for one, India were 171 for three at lunch with Deepti Sharma producing a resolute 54. Sharma shared 72 runs with Punam Raut (39 off 83 balls) but was dismissed at the stroke of lunch. After the break, England dealt two quick blows, dismissing skipper Mithali Raj (4) and Raut cheaply to leave India at 175 for five.

Earlier, India lost opener Shafali (63) Verma early when she was caught by Katherine Brunt off Ecclestone in the 30th over. Joining hands after losing Verma, Sharma and Raut showed great resilience as India took a lead of six runs at lunch.

Kamal Haasan will have three releases in 2015