Jekyll and Hyde: Ronaldo displays flashes of brilliance… but trolled for atrocious dribbling as Portugal beaten by Germany (VIDEO) 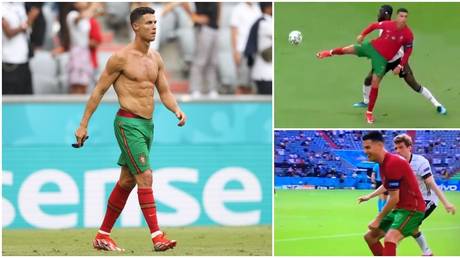 It was a day of mixed fortunes for Cristiano Ronaldo as champions Portugal were humbled by Germany in Munich and the Juve star inched closer to another personal accolade – but his performance didn’t come without a few flaws.

Ronaldo was left seething upon the final whistle as his Portugal side – so impressive as they edged to victory in Paris five years ago – wilted in the face of German resistance inside Bayern Munich’s Allianz Arena.

The evergreen Juventus marksman scored one and created another for Diogo Jota, but any designs that CR7 had on dragging his team to victory by the scruff of the neck were extinguished by a rampant German side who seemed insistent on correcting the record of their subpar performance against France in their Group F opener on Tuesday.

On the losing side today though. pic.twitter.com/DeNlX5iH7J

But it wasn’t for a lack of trying. Ronaldo, all 36 years of him, sprinted the length of the pitch to tap in a Jota cross after a German corner broke down to open the scoring on 15 minutes.

It was a goal which took him to within two of Ali Daei’s longstanding international goalscoring record of 109, and for a spell it looked as though Ronaldo was in the mood to get that over and done with on Saturday evening.

This goal from Cristiano Ronaldo is something special. He clears the ball, Made a Insane Sprint into the box and excellent positioning.

This is the way to describe this special one. 💫pic.twitter.com/rBRHi1r1ie

The German goals, all four of them, came in a 25-minute deluge either side of half time – and two of them were scored by the Portuguese as both Ruben Dias and Raphael Guerreiro found themselves in the wrong place at the wrong time towards the end of the first-half.

Ronaldo, provider this time, acrobatically returned the favor for Jota to tap in with around 20 minutes to go to give Portugal hope but the Juventus star was ultimately unable to stifle the ruthlessly efficient Germans.

Ronaldo going from long sleeves to short sleeves hasn’t made a difference in the second half pic.twitter.com/XgLW0mWZOS

In truth, it was a mixed bag for the world’s most famous football player.

He was instrumental to both Portuguese goals but some of his other cameos left a little more to be desired, such as his wayward second-half free kick which nestled somewhere deep in stand behind Manuel Neuer’s goal and prolongs his miserable form from the dead ball spot to just one goal in his last 50 free kicks in both the European Championships and the World Cup.

See also: Ronaldo’s less-than-impressive wing wizardry in the dying moments as he tripped over his own feet while attempting to whizz the ball in the German danger zone late in the game.

Ronaldo Fans: He’s the best dribbler, no player has a killer pace than him, he can dribble 4-5 defenders at a time.

But, to be fair to the five-time winner of the Ballon d’Or for the planet Earth’s best footballer, the sins were also mixed with the sumptuous, such as his outrageous piece of improv in an exchange with Antonio Rudiger.

The Group of Death 💀

Another narrative bubbling under the surface was that of Germany’s swashbuckling fullback Robin Gosens, scorer of Germany’s last goal and the rightful recipient of the man of the match award, who revealed earlier this year that Ronaldo had refused to exchange shirts with him during a Coppa Italia fixture between Juventus and Atalanta two years ago.

At the time Gosens said that the exchange made him “feel small“. This time around Ronaldo wasn’t able to catch him, let alone exchange post-match mementos.

The streets will never forget that Cristiano Ronaldo rejected Robin Gosens when he asked to swap shirts with the Portuguese superstar after a Coppa Italia clash between Atalanta & Juventus in 2019. #EURO2020 #GER #POR pic.twitter.com/Z9Qqrzs8HP

Maybe Ronaldo will want to swap shirts with him this time!

It now seems inevitable that Ronaldo will topple Daei’s international goal tally (he is two behind tying the Iranian) and perhaps even at this tournament – but can anyone really imagine a scenario where he retires from international football before achieving it?

He remains one of the game’s most potent goalscoring threats, a gifted creator and a beloved figure to many. But with Portugal’s chances of defending their trophy seemingly tethered tightly to Ronaldo’s performances on the pitch, these types of Jekyll & Hyde performances aren’t going to cut it.

Industries should go to Tier-II, III cities rather than…

Priyanka Chopra found it ‘weird’ to audition for…