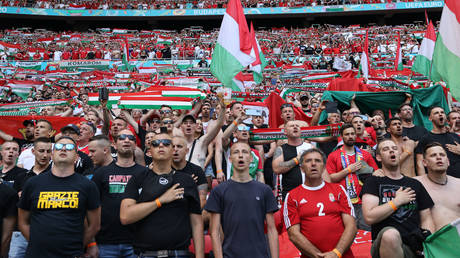 Fans of the Hungary national side made clear their opposition to the ongoing trend of taking a knee before games as they unfurled an anti-kneeling banner prior to kick off of their Euro 2020 fixture with France on Saturday.

Thousands of fans took to the streets of Budapest in advance of Hungary’s 1-1 Group F draw with France in the city’s Puskas Arena, with many of them singing and lighting flares in anticipation of the crunch game.

However, some fans also voiced their disagreement with the current trend of players dropping to one knee in the moments before kick-off – with sections of supporters displaying an anti-kneeling banner on the streets of the Hungarian capital.

The anti-racism gesture has been commonplace in football since last summer’s ‘Black Lives Matter’ protests which enveloped several cities in the wake of the death of George Floyd, but it has become an increasingly divisive issue since supporters have been allowed re-enter football stadiums leading to numerous instances of fans erupting in a cacophony of boos when it happens.

Hungary fans getting ready for Hungary vs France at Puskas Arena in Budapest. #HONFRA #EURO2020 pic.twitter.com/qBuW75P4QL

Hungarian football has been insistent in its opposition to taking a knee, with the country’s president Viktor Orban reacting furiously when players from the Republic of Ireland did so prior to a recent international friendly and accused them of “provoking” the Hungarian people.

“I am not in the least sympathetic to the kneeling – sport is about something else and there is no place on the field for that,” he said following the incident in which Hungarian supporters jeered the Irish team.

“If you’re a guest in a country then understand its culture and do not provoke it. We can only see this gesture system from our cultural vantage point as something unintelligible, as a provocation.

“The fans reacted the way those who are provoked usually react to provocation. They do not always choose the most elegant form (of reaction) but we have to understand their reasons. I agree with the fans.”

He added that Hungarian men kneel only “before God, the homeland and their beloved when they propose marriage.”

Orban’s stance might prove unpopular in some other international camps throughout Euro 2020 but the reaction of Hungarian supporters suggests that his opinion in matched in his home country.

Hungarian supporters, meanwhile, came under fire during their side’s Euro 2020 defeat to Portugal as Record claimed that sections of the capacity crowd directed homophobic chants at Cristiano Ronaldo.

The Juventus man had the last laugh however, as he plundered two late goals to help his side to a 3-0 victory.

Hungary had no such late collapse on Saturday as they scored an unlikely 1-1 draw with pre-tournament favorites France which, coupled with the absence of players dropping to their knee before the game, made for a most agreeable day for Hungarian supporters.