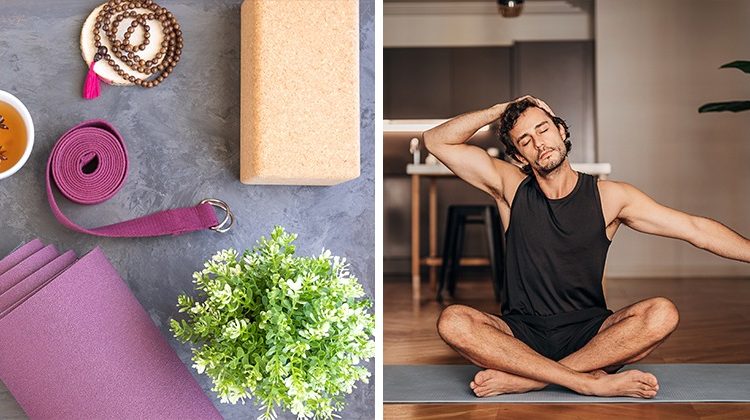 Do you ever see someone super limber and think “yeah, (s)he does yoga…”? You can tell just by looking. Some physical benefits of yoga can be enjoyed by noticing in the mirror and others can be felt.

Whether you’re a fitness fanatic or a laidback will-start-tomorrow sort of person, spending a few minutes on a yoga mat can help you reach your goals.

Yoga is an all-are-welcome kind of practice with almost limitless health benefits. There are asanas for absolutely everyone.

A lot of men tend to keep their distance from yoga, perhaps concerned that flexibility, lycra leggings and age-old philosophy are not for them.

But remember this, from the very first moment you start doing yoga, your body begins to transform. It only gets better after that.

The benefits of yoga transform everybody on a personal level but here’s what every yogi experiences.

A 2017 study stated that people who practice yoga regularly have low cortisol levels which are further linked to reduced stress and inflammation.

In a University of Illinois study, participants performed better on brain functioning tests after practising yoga, as compared to their performance after 20 minutes of aerobics.

A 2013 Norwegian study from the University of Oslo suggested that yoga practices can have an almost immediate impact on gene expression, particularly in immune cells.

Mobility is how you get from point A to B and flexibility is how far you’re able to go into point A or point B. Both are equally important.

A study done by the Colorado State University found that Bikram yoga—a series of 26 postures performed for 90 minutes in a heated room—can improve shoulder, lower back and hamstring flexibility. It can also help increase strength and decrease body fat.

Not just that, yoga can improve the range of your joints’ movement through its socket aka mobility.

Many postures like the warrior series, Utkatasana or Chaturanga Dandasana are meant to build strength and muscles. When you tone the body through these asanas, you build more muscles resulting in burning more calories even when your resting.

There’s a growing body of research that suggests that yoga can help erectile dysfunction.

In 2010, 65 men took part in a study on yoga and male sex function. These men had an average age of 40 and they saw a significant improvement in sexual score after 12 weeks of practising yoga.

As per a study published in The Journal of Pain, after four weeks of practising Iyengar yoga adults suffering from chronic neck pain experienced it with lesser intensity.

Researchers at West Virginia University also found that this type of Hatha yoga can effectively reduce lower back pain and improve overall mood.

A 2010 Boston University study showed that 12 weeks of yoga could help to reduce anxiety by increasing gamma-aminobutyric (GABA) levels in the brain.

Lower GABA levels may lead to depression and anxiety disorders.

According to a 2015 Department of Physiology and Diabetic clinic study, just three months of yoga can result in a decrease in body mass index, as well as no increases in blood sugar levels.

In fact, many diabetic patients have observed a difference in their blood sugar levels after few weeks of practising Mandukasana, Shashankasana, Yoga Mudrasana, Vakrasana and Gomukhasana at home.

Iyengar yoga program is designed for older adults. According to a 2008 Temple University study, it helps improve balance and prevent falls in older age.

Yoga practices also make you hyper-aware and help your bones align properly. As you continue to practice yoga, you re-train your body to unlearn bad postures and replace them with good posture habit.

Holding good posture make you feel fitter, leaner, taller and more confident. Not just that, good posture is a blessing for your digestion system.

According to a 2014 study, when practised daily, yoga may lower the risk of cardiovascular diseases such as blood sugar, high blood pressure and cholesterol.

Researchers from the Fred Hutchinson Cancer Research Center in Seattle found a link between regular yoga practice and weight management.

Out of 15,000 healthy, middle-aged adults, the ones who were overweight and were practising yoga began to lose weight while non-practitioners gained weight.

You live in a state of pure bliss. No anger. No anxiety. No depression. If you combine yoga with a few minutes of meditation, there isn’t much you can’t do.

Your brain structure changes with a yoga practice, literally. A 20-minute yoga session can improve your brain’s memory, speed and focus.

The brain structure of yoga practitioners has a higher grey matter in the prefrontal cortex that’s responsible for decision making and cognitive behaviour.

Start with a 20-minute yoga session and see where it takes you!