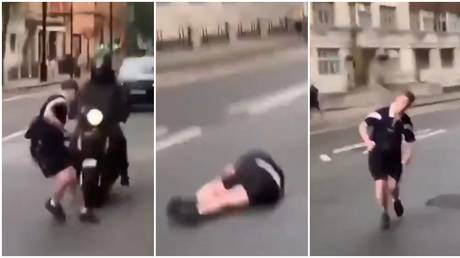 A drunk Scotland fan was knocked down by a motorbike as he staggered into oncoming traffic on a London street ahead of the Euro 2020 match against England on Friday.

The Tartan Army – as Scotland fans are known – have been massing in the UK capital before the meeting with old rivals England at Wembley on Friday night in a crucial Group D match.

One fan wearing a Scotland shirt escaped potentially more serious injury when he stumbled across a London street, apparently worse for wear.

Appearing oblivious to the oncoming traffic, the man staggered directly into the path of a motorbike as he made his way across the road.

The resulting collision sent him and the motorcyclist crashing to the ground, before the man got back to his feet and carried on his way.

A Scotland fan crossing the road in London tonight… pic.twitter.com/MPjQoAqqRS

Incredibly, the person filming the scene – apparently the man’s friend – could be heard laughing at the scenes.

It’s not known if the motorcyclist was injured or his bike damaged in the incident, but a friend of the fan reportedly said that the Scotland supporter was fine, posting a message reading “He’s aw gid boys” (He’s all good boys).

Thousands of Scotland fans are estimated to be making their way to London for a first major tournament meeting with England since the two nations met at Wembley in a Euro 96 group-stage game, which the Three Lions won 2-0.

Following that tournament, Scotland went on to compete at the 1998 World Cup in France before a 23-year absence from major tournaments which was only ended by qualification for this summer’s pan-continental Euros.

A restricted crowd of around 21,500 fans will be at Wembley to watch Friday night’s game, but that hasn’t stopped the Scots from massing in London.

That included filling the famous Leicester Square with blue bubbles and congregating in Hyde Park. The Scots have traveled in large numbers despite being urged to stay away.

🏴󠁧󠁢󠁳󠁣󠁴󠁿 Scotland fans definitely in London for a party… pic.twitter.com/7ENlbnlBMD

On the pitch, Scotland and England will meet for the 115th time in what is the world’s oldest footballing rivalry. England have recorded 48 wins to Scotland’s 41, with 25 draws.