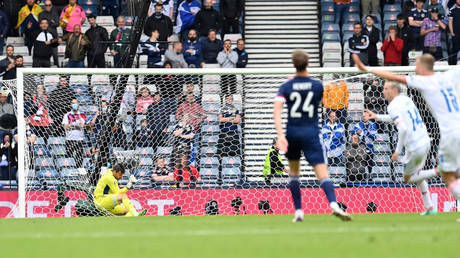 Czech Republic striker Patrik Schick has submitted an early contender for the goal of the tournament after he bent a sublime lob into the Scottish goal from the half-way line and past the despairing clutches of David Marshall.

Leverkusen’s Schick had handed the Czechs an early advantage in their Euro 2020 opener against Scotland in Glasgow when he headed home the first goal of game just before half-time but the 25-year-old striker’s influence on the wasn’t over – not by a long shot.

Less than ten minutes into the second half, Schick seized on a rebounded shot from Scottish defender Jack Hendry just inside the Scotland half and launched a long-range lob from 50 yards which sent ‘keeper Marshall scrambling back towards his line.

Marshall’s attempt were for nought, however, as Schick’s effort nestled in the back of his net and sent the 12,000 fans packed into Hamden Park into stunned silence – and prompted fans to immediately declare it as the best goal which will be scored during the tournament which, remember, is just four days old.

GOAL OF THE TOURNAMENT PRESENT TO YOU PATRIK SCHICK pic.twitter.com/cFeWvtPmYk

Goal of the Euros 🤯🤯🤯pic.twitter.com/ZStgArvBXf

This game is like haggis for Scotland. It’ll make them Schick to their stomach. #EURO2020

The football boffins quickly crunched the numbers after the goal and found that the Schick strike is the longest-range goal in either the European Championships or the World Cup dating back to 1980 and comes less than a day after Ukraine’s Andriy Yarmolenko announced himself as an early candidate for the tournament’s top strike when he deftly curled a left-footed shot into the Dutch goal in their 3-2 defeat to the Netherlands on Sunday evening.

Schick’s effort, though, will take some beating. The former Roma and RB Leipzig man has impressed in his still-developing international career of late, with the stunning goal at Hamden Park his 12th in 27 appearances for the Czech national team – but one suspects that he could play until his 100th birthday before scoring a goal which rivals that which stifled Scotland in their home stadium.

That goal was Schick.

🇨🇿 Patrik Schick with an effort that will go down in EURO history 🔥#EURO2020 pic.twitter.com/BqINLIPSMH

Ultimately, Schick’s brace proved the difference between the two sides with Scottish boss Steve Clarke unable to galvanize his troops to launch a comeback after going two goals down – with Schick’s exquisite combination of skill and opportunism well and truly taking the wind out of Scottish sails.

The post-match inquest in the Scottish dressing room will likely surround exactly why Marshall was so far from his goal that he may very well have been breaking Covid-19 restrictions, but as fans have detailed – it will be a goal that lives long in the memory.

Why was the keeper 40 yrds off his line ?

Scotland must be schick of the sight of him. Schick as a parrot 😃

“Why was the keeper 40 yards off his life?” one fan quite correctly enquired about Scotland’s Marshall.

Another said that that Scotland must be “Schick of the sight of him. Schick as a parrot.“

The loss leaves Scotland in a tricky position in Group D and means that Friday’s trick encounter with southern neighbors England now becomes a pivotal fixture if they are to have realistic ambitions of progressing to the knockout stages.

And one suspects that David Marshal, if he is selected, might well just keep his sight-seeing trips up towards the halfway line at a premium.