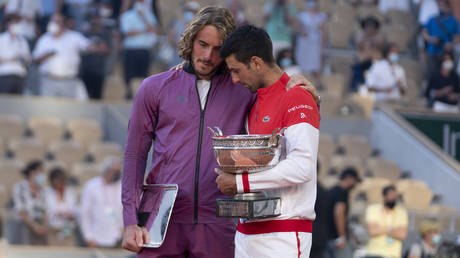 Greek star Stefanos Tsitsipas has revealed on social media that he was informed that his grandmother had died just minutes before he took to the court at Roland-Garros in his unsuccessful bid to win his first ever Grand Slam.

Tsitsipas stormed out of the gates to take a two-set lead against multiple-time Grand Slam champion Novak Djokovic on Sunday but the Serb powered back to win three successive sets to claim victory in the five-set clay court thriller.

The beaten finalist, who is tipped to graduate into becoming one of the sport’s top stars and is likely poised for several more Grand Slam opportunities as his career develops, dedicated his first appearance at tennis’ top table to his grandmother, after being told five minutes before he walked on to the court that she had succumbed to a long illness.

“This is entirely dedicated to her and only her,” Tsitsipas wrote on Instagram of his Grand Slam debut in France.

“Five minutes before entering the court, my very beloved grandmother lost her battle with life. A wise woman whose faith in life, and willingness to give and provide, can’t be compared to any other human being that I have ever met.

Tsitsipas’ grandmother is the mother of Apostolos, the father and trainer of the Greek tennis star – and Tsitsipas detailed in his emotional statement that none of his success on the court could have been possible without her influence throughout his young career.

“Thank you for raising my father,” Tsitsipas said. “Without him, this would not have been possible.

“Life isn’t about winning or losing. It’s about enjoying every single moment in life whether that’s alone or with others.

“[It’s about] living a meaningful life without misery and abjection. Lifting trophies and celebrating wins is something, but not everything.”

SSB trooper kills self in Bengal