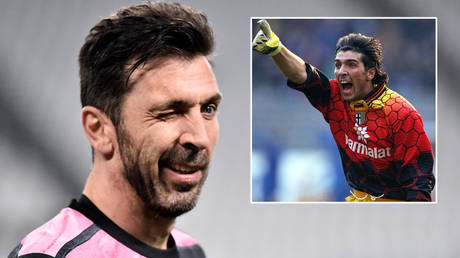 Gianluigi Buffon, 43, who is widely regarded as one of the finest goalkeepers of all time, is set to sign a two-year deal to return to former club Parma in a move which comes TWO DECADES after he first left the club.

Buffon is understood to be close to signing a two-year deal at the Serie B club which could extend his playing career past his 45th birthday, and the Italy legend’s homecoming appears to have been a transfer coup for his former team amid reports that Buffon rejected overtures from Spanish giants Barcelona and Atletico Madrid.

The 176-cap keeper made the first of his 220 appearances for Parma in the 1995-96 season, spending six seasons at the club before moving to Juventus in 2001 in a then-world record fee for a goalkeeper of around $63 million.

Buffon spent an incredible 17 seasons in Turin, making 656 first team appearances during, before moving to Paris Saint-Germain on a free transfer.

He had been expected to announce his retirement from the game but recently told reporters that he felt his body remained in prime shape.

“I decided to continue playing because I still feel good,” he said at a summer coaching camp for young goalkeepers.

Only fellow club legend Alessandro Del Piero has registered more appearances in Juventus’ black and white strip than Buffon, who won 22 trophies during his two spells at the club and appeared in three Champions League finals.

Buffon’s time in the French capital was short-lived and he returned to Juventus ahead of the 2019-20 campaign, helping them to yet another Serie A title – Buffon’s tenth during his association with the club.

According to Sky Sports, Buffon has opted to ink a deal with Parma after considering several offers from the continent, with his decision to choose Parma thought to be guided by his desire to keep his family in Italy.

‘I belong to the old school’: Buffon’s wife says Ronaldo’s family should DROP social media after his sister hits out at Juventus

Buffon will have his work cut out for him. Parma finished bottom in Serie A this past season, scoring just 20 points along the way, and will rely on Buffon’s talent and leadership skills to help their expected promotion push in the forthcoming campaign.

Further reports suggest that Buffon is targeting a place in Roberto Mancini’s Italy squad for next year’s World Cup in Qatar.

Buffon won the last of his 176 caps in 2018 and wasn’t named in Mancini’s squad for the current European Championships but is understood to be eyeing next year’s tournament for what would be a remarkable international swan song.