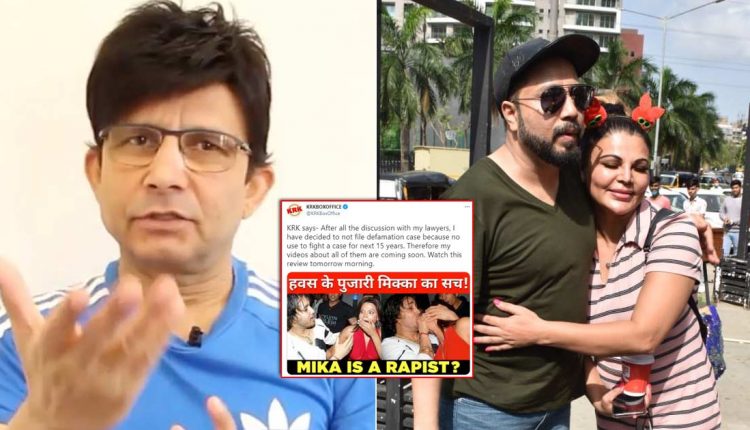 There’s no single day when Kamaal R Khan hasn’t launched an attack on Twitter. From Shah Rukh Khan, Disha Patani to Salim Khan and Vivek Oberoi, he has dragged them all. In his battle with Salman Khan, he also locked horns with Mika Singh, who supported the superstar. Now, KRK has dragged the Rakhi Sawant controversy and called the Punjabi singer a ‘rapist.’ Read on for details!

For the unversed, it was back in 2006 when Mika and Rakhi indulged in a huge controversy. They were both present at Singh’s birthday party when Sawant accused the singer of forcibly kissing her. Pictures and videos of the same are viral to date. The Bigg Boss 14 contestant even filed a police complaint and said she’ll never talk to him again.

Kamaal R Khan has now brought back the issue after Mika Singh released the song KRK Kutta on him. Giving a glimpse of the same on Twitter, the self-proclaimed critic wrote, “KRK says- After all the discussion with my lawyers, I have decided to not file defamation case because no use to fight a case for next 15 years. Therefore my videos about all of them are coming soon. Watch this review tomorrow morning.”

Kamaal R Khan shared a YouTube thumbnail where Mika Singh was seen forcibly kissing Rakhi Sawant. The title on the picture was written as, “Hawas ke poojari Mika ka sach.” Just not that, another text at the bottom read, “Mika is a rapist?”

Check it out below:

KRK says- After all the discussion with my lawyers, I have decided to not file defamation case because no use to fight a case for next 15 years. Therefore my videos about all of them are coming soon. Watch this review tomorrow morning. pic.twitter.com/ZVOZ8D1oFu

Meanwhile, KRK in his previous post said that he wouldn’t let the industry make him another Sushant Singh Rajput.

Must Read: Minissha Lamba On Launching Her Own App: “I Wish To Connect To My Fans Via Video Chats Or Normal Chats”