‘I wish I’d taken him the f*ck out’: Bloodied fan king Diaz almost sets up win over Edwards with late punch at UFC 263 (VIDEO) 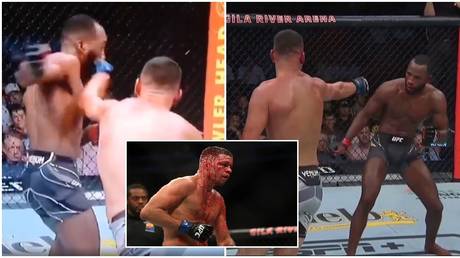 A bloodied Nate Diaz cemented his status as a UFC icon in a decision defeat to Leon Edwards which was filled with showmanship and almost saw Diaz pick up a shock win when he rocked the Brit late on.

Edwards remains on course for a shot at welterweight gold, but only just after his good work across four rounds at UFC 263 in Glendale almost came undone when he was caught by Diaz with a huge left hand following a trademark slap in the last minute of the fifth round.

In classic Diaz fashion, he preferred to raise his hand at Edwards in a goading gesture rather than move in for the finish when the Brit was staggering backwards.

Any other fighter: *goes in for the finish*

Nate Diaz: *laughs and points at his wobbly opponent*#UFC263 pic.twitter.com/Ppc0gbPUem

Edwards recovered his senses to see out the fight and earn a dominant 49-46 win across all three scorecards which his work across the preceding rounds clearly deserved.

Before his late wobble, ‘Rocky’ had picked apart Diaz using a variety of weapons, with one assault on the ground utilizing brutal punches and slicing elbows – leaving Diaz with a significant gash on the side of the head and blood streaming down his face.

Nate Diaz: one of one #UFC263 pic.twitter.com/QAU3fkwSZP

Undeterred, Diaz taunted Edwards throughout the fight, using his full array of antics to delight the full house at the Gila River Arena.

With his status as a legend of the game long secure, the outcome for Diaz appeared of secondary concern.

“Congratulations to Leon. I wish I would have took his ass the f*ck out… It’s the Nate Diaz army. I appreciated the love and support from the whole army,” said the 36-year-old Stockton star.

“We’re having a fat a** party at my house tonight, come through.”

The shot that nearly changed the fight for Nate Diaz 💥 #UFC263 pic.twitter.com/KzwTf2aHjE

Edwards almost saw his title shot credentials unravel in a shaky conclusion, but nonetheless extended his unbeaten streak to 10 and again demanded a shot at the 170lbs title owned by Kamaru Usman – the last man to beat him inside the Octagon.

“Nate’s a veteran. I hit him with everything but the kitchen sink,” Edwards said in his post-fight comments.

“I give my respect to him. I’m young 29 years old, still learning, still growing. I look forward to my title shot.

“I didn’t feel no pressure to be honest. I approached it like another fight. Nate’s a veteran, I give my respect to Nate. I look forward to my world title shot.”

Locks in his 1️⃣0️⃣th straight win!

💢 @Leon_EdwardsMMA got the job done after going the distance. #UFC263 pic.twitter.com/bP9b1AVAWn

Meanwhile, UFC boss Dana White was full of praise for the “unbelievable” Diaz, whose stock somehow rose yet again despite falling to a 13th professional MMA defeat.

The fan favorite part was evident in the love flowing Diaz’s way from the MMA community online.

“We will never ever in our lives see another fighter/man/personality like [Nate Diaz]. Thank you for a lifetime of entertainment,” added fellow fighter Deron Winn.

We will never ever in our lives see another fighter/man/personality like @NateDiaz209 … thank you for a lifetime of entertainment!

“Being a Nate Diaz fan is so much fun. He can be getting his ass kicked for 24 minutes but if he has one good moment you can act like he won,” wrote one fan, summing up the prevailing mood.