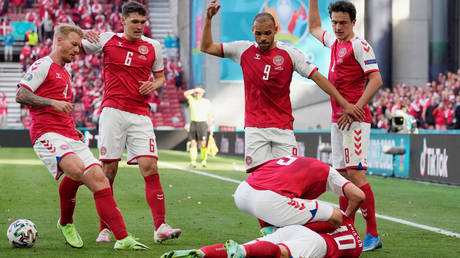 The Euro 2020 game between Denmark and Finland has been abandoned after Danish star Christian Eriksen collapsed on the pitch and was given CPR in what appears to have been a serious medical emergency.

Eriksen fell to the ground with around two minutes remaining in the first half prompting the immediate concern of his teammates and match officials.

Emergency services soon rushed to the field where reports state that the Inter Milan player was given CPR on the pitch as concerned teammates and fans looked on.

After lengthy treatment, Eriksen was stretchered from the pitch with his Danish teammates providing a wall of cover to obstruct the view of pitch-side photographers.

UEFA has since confirmed that the Group B match with Finland has been suspended and will not be replayed due to a “medical emergency“.

The incident prompted huge concern in the Parken Stadium in Copenhagen, with several supporters pictures in tears in the stands. Eriksen’s Danish teammate Martin Braithwaite appeared to be praying, while goalkeeper Kasper Schmeichel also appeared to be gravely concerned.

Shocking scenes in Denmark Vs Finals match, as Christian Eriksen suddenly collapses to the ground mid-play.

Paramedics have rushed to the field and CPR is being utilized.

Denmark’s players had to form a protective ring around their teammate. A distraught wife was broadcast to the world. TV broadcasters and cameramen are capable of blocking footage of pitch invaders, but not this? Sorry, that is not ok.

The UEFA EURO 2020 match in Copenhagen has been suspended due to a medical emergency.

Schmeichel and defender Simon Kjaer were also pictured comforting a woman on the field who is understood to be Eriksen’s wife.

More than 30 minutes after the incident, it is understood that many fans remain inside the stadium – with several of them said to be in a ‘state of shock’.

A photograph of Eriksen being removed from the field on a stretcher appears to show that Inter Milan player was conscious at the time – though no official updates have been provided as to the status of his health as of yet.

Biden to hold solo press conference after Putin, avoiding risk of mistakes while sharing stage and keeping control of narrative

Thrilled to team up with ‘Baahubali’ writer:…