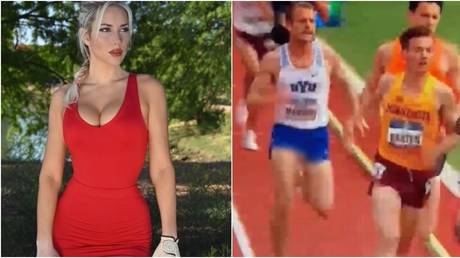 Stunning former golf pro Paige Spiranac has hinted at double-standards after she says she witnessed an athlete run a 3,000-meter race “with his nut sack out”.

Spiranac, 28, has created numerous headlines in the sports press in recent months with the outspoken star often detailing the type of attention she received on social media due to her fondness for posting daring photographs to Instagram – but the American says that she is often scapegoated for daring to upload photographs showing her cleavage and has highlighted what she sees as a double-standard when she saw a runner compete on television with a part of his anatomy on full view to the audience.

Collegiate athlete Garrett Marsing was left red-faced after competing in the NCAA outdoor track and field championships 3000m steeple chase in Eugene, Oregon when, with around 400 meters to go, television images appeared to show Marsing’s genitalia outside of his shorts.

Footage of Marsing running the final stage of the race with his manhood on full display has since gone viral online – ensuring that the athlete, who was running his final ever race at college level, won’t soon forget his final NCAA track meet.

Marsing was spotted with the unfortunate problem on the last lap. © Twitter

Spiranac, though, was also taken aback by what she saw – and not just the sight of Marsing’s nether regions, but also what it highlighted about people calling her out for displaying too much flesh.

“I just watched a dude run with his nut sack out for 3000m in the NCAA championship. I don’t want anyone complaining about my cleavage anymore,” she wrote on Twitter, before adding that perhaps the lack of adequate running shorts was detrimental to Marsing’s performance.

I just watched a dude run with his nut sack out for 3000m in the NCAA championship. I don’t want anyone complaining about my cleavage anymore.

He came in 4th. I blame the balls

Spiranac, who has said that she received d*ck pics daily in her social media DMs, has also previously said that she has been told that “no one will take [her] seriously if you keep posting pictures with cleavage” – an assertion that many of her 3 million followers on social media would likely disagree with.

The outspoken Spiranac rarely fails to miss an opportunity to fire back at the fans who make light of her own fondness for flaunting her figure online.

I’m sorry I was born with tits. I’m not going to hide them because your pea brain can’t comprehend the fact a woman can be smart, strong, and sexy

Earlier this year she responded to a fan who chastized her for “wanting to be taken seriously, but wants to show of her cans” by slamming the Twitter user for being unable to comprehend the reasons for her series of skimpy images online.

“I’m sorry I was born with t*ts,” she shot back. “I’m not going to hide them because your pea brain can’t comprehend the fact a woman can be smart, strong, and sexy.”

It remains to be seen quite how smart, strong and sexy Marsing views himself in the cold light of Saturday morning after displaying his manhood to a watchful television audience – but his X-rated run certainly appears to have ignited a debate in which Spiranac is only too happy to wade in to.

‘For the haters to dry their tears with’: Golf influencer Spiranac plugs merchandise in latest rebuttal to ‘cleavage critics’

A set for the ages: Novak Djokovic, Rafael Nadal, and 90-plus minutes of magic at Roland Garros

Hajj pilgrimage will be limited to 60,000 people from within Saudi Arabia due to Covid, kingdom says

Sunita Narain to be discharged soon