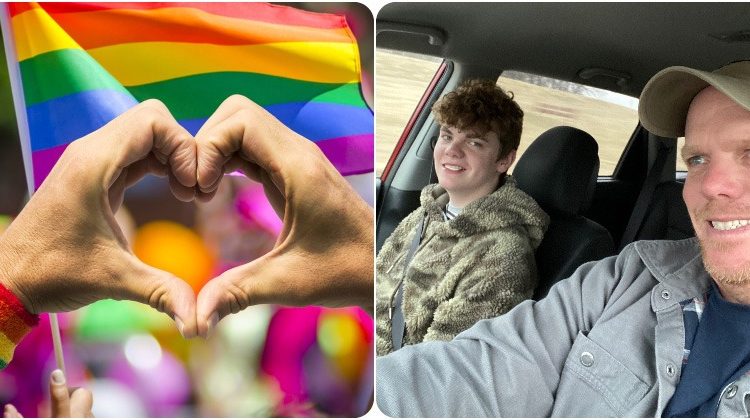 It’s June and the Pride month has taken over.

The month-long celebration is about dignity, equality, self-affirmation for the lesbian, gay, bisexual and transgender community. Pride month encourages everyone to come together and is dedicated is raise the LGBTQ voices and culture.

The worldwide celebration includes parades, performances, theatre and several other celebrations. Amid the pandemic, while it came to a standstill, some people are celebrating it in a different manner.

One such example is of this father-son duo.

Recently, Caden Wyatt 15, came out as gay and he did so with his dad on his side. It’s also the first time, the family has hung the Pride flag outside their house to show their support for the son.

The simple act of John Wyatt, 45, has now gone viral on TikTok.

He took to social media platform and announced to the neighbours and millions of TikTok users about his son being gay.

He put Lady Gaga’s Born This Way in the background. In a matter of four days, the video garnered a lot of comments, praise and massive support.

Caden, in an interview, mentioned that he is very lucky to have such supportive parents since he knows not many people are as lucky as he is.

The family lives just outside of Tulsa, in Owasso. While they had a conservative mindset before their son came out, it gradually changed as they observed that their son might be gay.

John said, “That’s when we really started hugging [the community], because we knew our son was gay, and at any moment he could come out of the closet.”

The flag is an ‘Allied flag’ that’s raised outside their house. It has the letter ‘A’ on huge black and white striped background. Caden also has the pride flag in his room. He believes that the flag will show that his family encourages the LGBTQ community.

He said, “I want people to know that my parents are behind them, and so am I.”

Some people on TikTok objected the flag, saying it puts focus on cisgender and straight people. John then explained in the follow-up videos that the black and white bars represent the straight and cisgender community, allies but the rainbow colours in the letter ‘A’ promotes the LGBTQ community.

He mentioned that he had researched about the flag and wasn’t promoting any wrong information.

Many people commented on the video, saying how they wish their parents would accept their sexuality. John also said that he hopes this flag is a reminder to everyone that no one is alone in this journey.

John knew that Caden won’t be able to come out so boldly, but he was glad to see his son finally opened up about his sexuality.

Acceptance is all it takes and it’s good to see that more and more parents are welcoming their kid’s identity just as they come.

Good on you, #Oklahoma! ️‍️‍⚧️https://t.co/7zGPR5qjGz

I am a conservative orthodox Rabbi…WOW #JohnWyatt you are an incredible Father to have recognized Caden early on, G-d created all of us in his most perfect image… . #AntiAlot Dad Hangs Pride Flag To Support Son In Viral TikTok.https://t.co/gjdA6XE4wY

Why is this making me tear up? https://t.co/rFD78ZfuJB

Don’t get carried away by what you see: Model Diva…