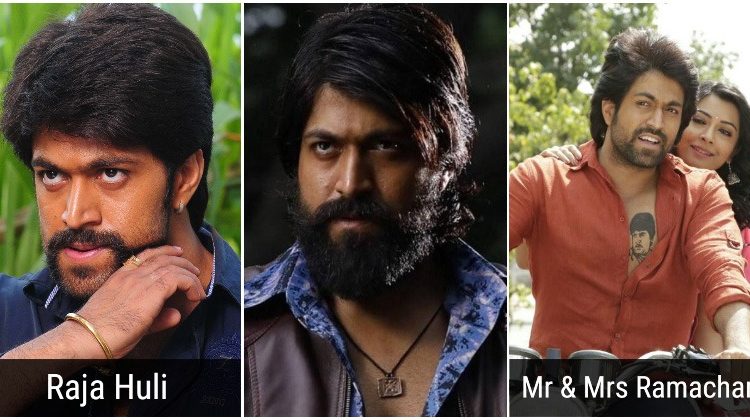 There was a time when Rock Star Yash was immensely popular, but predominantly among the audiences of the southern film industries, mainly, the Kannada speaking one.

However, in the last few years, that has changed completely.

Now, Yash enjoys a massive fan base even in Hindi-speaking regions.

Here are some of his best movies that his fans swear by, which is clearly why fans of Kannada movies just can’t enough of him

Drama is a romantic comedy thriller, and of the finest films that the Kannada film industry has made in the last decade or so.

Yash plays the character of a student who has set out to avenge his girlfriend being slapped by the college principal. What ensues is a comically charged but gripping story.

The movie performed extremely well at the Box Office and garnered largely positive reviews from critics.

One of Yash’s earliest films, Moginna Manasu is again, based around the life of college students and deals with themes like love, friendship, and the everyday struggles that students face.

The movie is shot from the perspective of one of the women in the group of friends and tells a very poignant story. This film too was a massive hit at the box office, and much appreciated by critics.

Yash plays the titular character in this one, who’s the son of a rich landlord in a village.

Like the previous two films, the themes of friendship and love are vital aspects in this film as well. Yash’s character gets falsely implicated in a murder, and how he proves his innocence is what the movie is about.

Again, it did phenomenally well, beating out Krrish 3 in Bangalore, on the week of its release.

Released back in 2014, Mr & Mrs Ramachari is a run of the mill, hardcore romantic drama film, which is also quite comically charged.

It had one of the wildest box office runs down south. So much so, that there were a number of remakes in Hindi, Bengali, Tamil & Telugu.

Again, a romantic drama that Yash featured in, Googly released in 2013 and is one of the first films from Yash that was dubbed in Hindi.

The Hindi-dubbed version for TV was a massive hit across India. Yash plays the role of a brilliant student, who falls in love with a girl, gets his heart broken due to a misunderstanding, becomes a successful businessman, and tries to reconcile things with his ex.

The movie is your typical masala, romantic entertainer. Still, so good was the audience response to it, that it is being remade in Bengali. Apparently, a sequel to the original is also in the works.

And finally, there is KGF: Chapter 1. You must have been living under a rock if you didn’t see this coming.

Thanks to its pan India release, and OTT platforms, KGF took Indian filmgoers by storm. Without a doubt, it was one of the best messianic stories we have had in a really long time.

Furthermore, it really established, just how capable Yash is, as an actor. Just look at the excitement people have when they talk about KGF: Chapter 2, and you’ll get what we’re on about.

We know that there certainly are more films where Yash’s performance was commendable. However, for someone who’s just getting into Kannada films, and has started exploring Yash’s movies, this is the perfect list to follow.

Will give befitting reply to terror attack: Rajnath