Lawyers protest in Kothagudem against physical hearing of cases 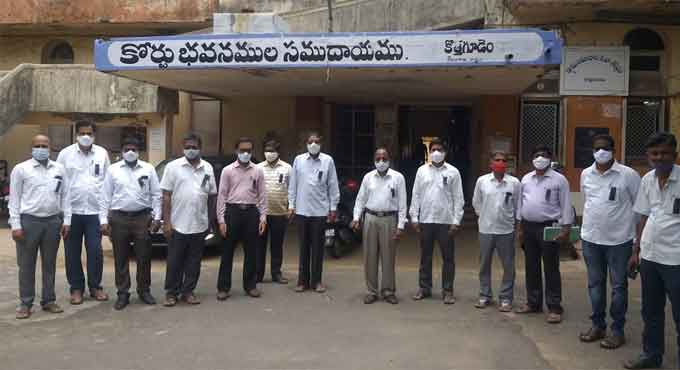 They alleged that the Collector (FAC), Anudeep D, violated Supreme Court guidelines by allowing physical hearing of cases even as all the courts in the country were hearing cases in virtual manner as per the Supreme Court’s (SC) directives in the wake of a spike in Covid cases.

The Apex Court directed that clients and lawyers should not appear physically in court but attend the cases online until June 30. But the Collector failed to comply with the SC order and heard cases on Thursday in addition to which issued a schedule of hearing on June 11 and 14.

The association leaders noted that on an average, 25 cases come up for hearing every day, and with two lawyers and four clients appearing for a case, at least 150 people from all parts of the district would have to gather at the Revenue Court. Such a huge gathering might spread Covid posing a threat to the lives of clients as well as the lawyers, they noted, adding that the Bar Association had submitted representations to the Collector twice seeking virtual hearing of cases.

The Bar Association general secretary N V Rajesh, joint secretary Kasani Ramesh, treasurer Md. Sadiq Pasha, office bearers A Karunakar, Santhosh Sahu, monitoring committee member Mendu Rajamallu and others took part in the protest. They informed that the matter would be reported to the State and Central governments besides the High Court and the Supreme Court.

The post Lawyers protest in Kothagudem against physical hearing of cases appeared first on Telangana Today.

IPL 13: Have told youngsters to go out there, play with…