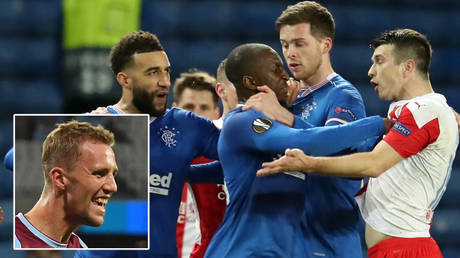 Ondrej Kudela, the Czech defender who was banned for 10 matches for racial abuse in a huge controversy in April, was not proven to have committed the offense and is not a racist, according to international teammate Tomas Soucek.

Veteran center-back Kudela will sit out Euro 2020 as part of his ban for racist behavior when he was seen covering his mouth and appearing to say something to Glen Kamara, of Scottish side Rangers, while playing for Slavia Prague in Glasgow in March.

Kamara reacted with fury on the pitch, resulting in a brawl, an altercation in the tunnel afterwards to which police were called and an ugly fallout including claims by Kamara that he had received death threats and an unsuccessful defense of Kudela by his club.

“I stood behind Ondrej the whole time,” said Soucek, who was the Czech First League Player of the Year at Slavia before signing for Premier League side West Ham, speaking to idnes.cz.

“No one has proven anything, yet everyone condemned him and he received a long ban. It is absurd. I know him so well and I can’t imagine him saying anything racist.”

Kudela denied racism and said he was “startled” at the finding, initially being charged in April and failing to overturn the ruling a month later after he claimed there was a lack of compelling evidence.

Slavia chairman Jaroslav Tvrdik said the club respected the decision, adding that Kudela should not have approached an opposition player while pledging to take ongoing “positive steps” to prevent a similar situation from happening again.

In April, reports said that Scotland’s prosecution service was considering charges against Kudela of “racially aggravated conduct”, which can carry a punishment of six months in jail.

‘Should’ve been for life’: UEFA accused of being soft as Slavia star cops 10-MATCH BAN for ‘racist behavior’ towards Rangers rival

Some figures in the game criticized UEFA’s ruling for its leniency, with former Scotland striker Chris Iwelumo calling it “laughable” at the time while arguing that the administrating body should have set a precedent with a stiffer penalty.

“It should be a minimum one-year ban to a life ban,” he told Sky Sports. “Let’s eradicate it from the game.”

Soucek appeared to voice his reservations over the way the issue of racism is being approached by some. “I tell myself that when they look for racism in everything, they can never get rid of it completely,” he said. “On the contrary, they are harming themselves.”

Kamara was banned for three games for his part in the fracas. The midfielder is part of the Finland squad for Euro 2020, while Kudela was not selected by the Czech Republic.

‘I took it calmly’: Journalist of Armenian descent who was blocked by Azerbaijan can go to Euro 2020, Russian ministry confirms