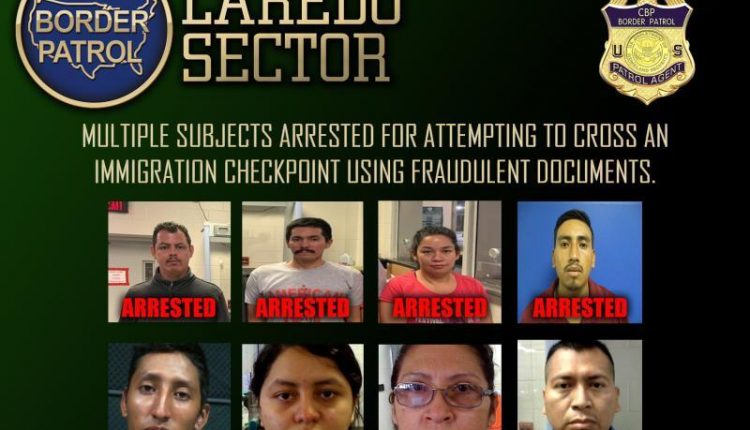 HI INDIA NEWS DESK
LAREDO, TX – U.S. Border Patrol agents assigned to the Laredo North Station arrested eight undocumented individuals as they attempted to evade apprehension by using fraudulent identification documents as they were traveling via commercial buses through the Interstate 35 (I-35) checkpoint. All apprehensions occurred as agents performed immigration inspections on passengers of Greyhound or Tornado buses.

The first incident occurred during the evening of May 30. Baltazar Bentancourt-Najera, a 24-year-old Mexican national, was traveling on a Greyhound bus when he attempted to use both fraudulent Passport and Social Security Cards.

The next day during the late afternoon, when 35-year-old Luis Castenda-Pereyda, and 20-year-old Andres Bentancourt-Alcocer Jr., both Mexican nationals, were encountered traveling via Greyhound bus. Both subjects presented fraudulent Passports and Social Security Cards to agents during an immigration inspection.

The last encounter in this string of arrests happened on the early morning June 3. Claudia Janet Menjivar-Cardona, a 34-year-old Honduran national, Julio Maximiliano Ruiz-Barrios, a 38-year-old Guatemalan national, and Giovanni Antonio Lara-Escobar, a 39-year-old Salvadoran national, were traveling onboard a Tornado Bus when an agent performed an immigration inspection on the occupants. All three subjects presented fraudulent U.S. passport card to agents to attempt to pass through the checkpoint.

All the individuals were found to be illegally in the country and were taken into custody to be processed for their immigration violations.

The use of fraudulent documents is another tactic that criminal organizations use to take advantage of those who they seek to exploit knowing they will be caught by the keen eyes of agents. Agents remain vigilant performing immigration inspections while enabling legitimate trade and travel through checkpoints.

fraud docs at a checkpoint