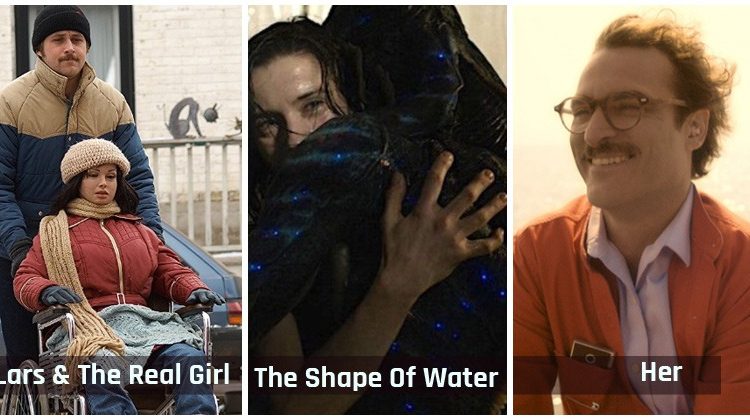 Love stories are warm, fuzzy and leave you feeling like your soul just took a dip in a hot cup of coffee.

However, not all love stories are about a human heart beating for another human heart, sometimes love is found in places that are not expected.

Here are 7 movies that explored the concept of love between a human and a non-human, giving this genre a very interesting spin:

This movie gives you all the ‘feels’ even though it’s a love story between a human and an AI.

A lonely man finding love in his voice assistant makes you feel sad and pray for a happy ending for him at the same time. You can probably re-watch it and still feel emotional.

Dubbed as ‘Romeo and Juliet’ and this Shakespearean romance between a human and a zombie is a very interesting tale to witness.

The zombie ends up eating the human’s boyfriend and an apocalypse love story follows.

3. Beauty And The Beast

This one is not just a childhood tale brought to life but is a metaphor about finding inner beauty in humans and is one of the oldest stories in this genre.

The story is simple, a woman is married to a beast, who is basically a prince living under a curse. True love breaks all barriers, including his curse and they live happily, ever after.

An extremely interesting and well-made movie, please watch this in case you still haven’t experienced it. This is more than just a human falling for an AI.

This one basically spells out a very scary future for cross-species romance where humans will be or can be manipulated at the hands of a virtual machine, who will take over our emotions and our world.

Ryan Gosling plays a loner who is basically anti-social as well.

When his family is elated to know that he has found love, their whims and fancies burst like an over-filled balloon after they realise that his internet lover is actually a life-size plastic doll.

6. The Shape Of Water

Known as a work of science moulded in magic, this one tugged at everyone’s hearts when it was released back In 2017.

Elisa, a janitor, finds love in an amphibious man who is captured at a lab she works at. She gets him home, falls in love with him, as she continues to care for him and the climax, is the perfect ending to this odd tale.

This movie defined teenage love for so many people, it’s not even funny.

Bella, a human who falls in love with the pale-faced Edward, a vampire, was a love story that was mocked and adored in equal measure, so much that it is one of the biggest movie franchises in the world.

Aryan Khan Speaks Through His Lawyer, Says “Arbaaz Merchant Is Not My Servant, He’s Not In My Control”

B Praak On Winning A National Film Award For Teri Mitti: “Today Will Always Remain A Precious Day In My Career”

Salman Khan Asks Iulia Vantur To Pose For A Picture But She Leaves, Bhai Says “Madam Ko Jaane Do”

64 Trendy Amazon Prime Day Finds That Will Rake In the…