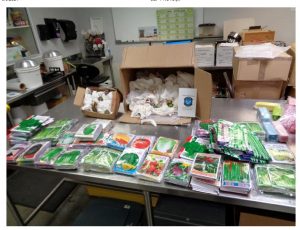 HI INDIA NEWS DESK
LOUISVILLE, KY— U.S. Customs and Border Protection (CBP) officers in Louisville sometimes call for reinforcements when a parcel’s contents could pose a threat to agriculture and related industries. CBP’s Agriculture Specialists in Louisville have been busy this spring experiencing a large increase in items that cause a threat to farming communities.Duck Meat

One of the most common items seized by these specialists is live plants and seeds for planting. Most of the shipments come from China and are prohibited under the Plant Protection Act (PPA)because they lack the required permits and certificates. Live plants and seeds are high risk for plant pests, including insects, diseases, and weeds. The live insect shipments Agriculture Specialist have encountered are also regulated under the PPA and by U.S. Fish and Wildlife.

Additionally, a lot of animal products have been seized. These items are prohibited entry because they carry livestock diseases. One such seizure was declared as “plastic samples” but was foil bags of duck tongues, a delicacy in China. Other items commonly seized are live eggs for hatching. These are prohibited because hatching eggs can carry Newcastle disease and Avian Influenza.

And the shippers of these items’ mis-manifest or hide their contraband in their packages: insect eggs smuggled inside stuffed animals, pears from Korea, manifested as Hair Band, and strawberries from China, manifested as Ladies Sweater pose a risk of various plant pests, including Oriental Fruit Fly.

During a typical day last year, CBP agriculture specialists across the nation seized 3,091 prohibited plant, meat, animal byproducts, and soil, and intercepted 250 insect pests at U.S. ports of entry. Learn more about what CBP accomplished during “A Typical Day” in 2020.

CBP conducts operations at ports of entry throughout the United States, and regularly screens arriving international passengers and cargo for narcotics, weapons, and other restricted or prohibited products. CBP strives to serve as the premier law enforcement agency enhancing the Nation’s safety, security, and prosperity through collaboration, innovation, and integration.

Barcelona and Atletico Madrid draw to give Real title advantage

Covid-induced black fungus cases on rise in Maha, Gujarat: How deadly is it?

Daily Covid cases declining in UP, means our strategy is successful: Yogi Adityanath

Need to step up measures for well-being, protection of children during Covid-19 second wave: SC judge

8 die of Covid-induced black fungus in Maharashtra: How deadly is the infection?

Aamir Khan’s daughter Ira: I cry in the gym