Early Childhood Education Program For 3-Year-Olds Will Open for Free in Sept. in NY School District 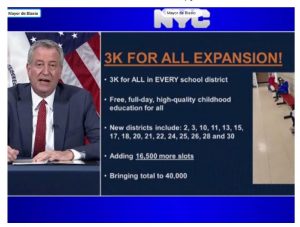 A “3-K for all” program has been a long-held goal of de Blasio’s, several City Council members and early childhood education advocates.

Some districts in the Bronx and Brooklyn have offered free early childhood education for 3-year-olds, but universal 3-K seemed a distant dream.

De Blasio, who recently counted universal kindergarten as his administration’s signature achievement, kicked off his announcement with a simple statement: “Today the dream comes true.”

De Blasio said federal stimulus funds from the recently-passed $1.9 trillion American Rescue Act will help fund the program, but he didn’t offer a figure on cost other it will be a “substantial investment.”

Porter extolled the benefits of early childhood education in her own life.

“The best part is that it’s going to be free and it’s going to save New York City families about $10,000 a year, and so we can put that into a college savings plan,” she said.

A cavalcade of City Council members who’ve long pushed for universal 3-K joined de Blasio and Porter. Council Member Ben Kallos noted he has a 3-year-old daughter himself and said his family will be applying for the program.

“Mayor de Blasio, I’ve been asking for this for so many years, what will we talk about?” Kallos said.

De Blasio said the ultimate goal for the program is about 60,000 slots for children.

Parents can apply for the program at myschools.nyc or by phone at 718-935-2009. They can find more information here.

Hope I can build it up from here on: Nortje after re-joining squad

TMC vs BJP over Mamata’s ‘audio tape’ on Sitalkuchi firing

Double masking can be potent to protect people from Covid-19: Study

Scaling up beds capacity but shortage of oxygen, Remdesivir: Kejriwal on Delhi Covid…

With eye on rising Covid-19 cases, Buttler urges people to stay at home

We need to build a bunch of pacers for T20 World Cup: Waqar Younis