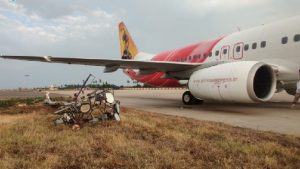 “All 64 passengers on board the flight and the crew are safe,” Vijayawada International Airport director G Madhusudan Rao said.

Air India Express said it has ordered an investigation into the incident.

In visuals, the electric pole with several lights beside the runway is seen completely smashed to the ground. A large dent is also visible on the far end of the plane’s right wing that hit the pole.

India Express is a wholly-owned subsidiary of Air India, and has a market share of 7.1 percent in the country, according to company information on its website. The low-cost carrier operates a fleet of 24 Boeing 737- 800 Next-Generation aircraft.

‘Question on GSP in India is very high on my radar’: USTR nominee

TikTok owner ByteDance to pay $92M in US privacy settlement

US launches airstrikes on Iran-backed terrorist infrastructure in Syria

Phase-2 Covid-19 vaccination on March 1: All you need to know

Pahlaj on 35 years of Govinda-Neelam’s Ilzaam

Number of people injured in hard landing in Istanbul Airport…