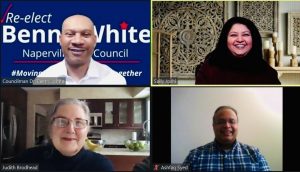 CHICAGO, IL -A Virtual Meet and Greet event was organized on Sunday, January 31st​ ,​ 2021, to support the re-​election​ of Dr. Benny White to​ the Naperville City Council. In 2017, he became the first person of color to have been elected to serve on the Naperville City Council. A large number of community leaders and residents of Naperville registered online and participated in the event. The election will take place on April 6th, 2021, with mail in ballots starting in February25​, 2021 and early voting beginning March 22, 2021.

Speaking on this occasion, Dr. Benny White said​ that his key​ platform initiatives for the campaign are Community Engagement, Financial Stability, Public Safety, Attainable Housing, and Smart Sustainable Development. “I am deeply committed to keeping Naperville as the best city in the US to live and raise families,” he added.

“While on Council, I have led the effort in recognizing the rich diversity of Naperville while celebrating our differences all in an effort to advance inclusion throughout the Naperville Community,” said Dr. Benny White with a sense of pride. “The launching of a grassroots organization, Naperville Neighbors United, was an important milestone in providing opportunities for neighbors to get to know one another and to develop camaraderie​ ​ among them,” he added.

“Councilman Benny White has the conviction to stand up for his values and the needs of his community. He has always approached issues with integrity, knowledge, and the desire to listen to his constituents,” said Saily Joshi, a host of the Meet and Greet Event and a Naperville Community leader.

Ashfaq Syed, another host of the Meet & Greet Event and a Naperville Community leader, said that when Dr. Benny White founded Naperville Neighbors United, the focus was on giving our community a safe space to hold courageous conversations. “Our city would greatly benefit from re-electing the Councilman Benny White in April, 2021, as we need his voice and integrity in Naperville,” added Ashfaq Syed.

Judith Brodhead, a current member of the Naperville City Council who has served since 2009, noted, “Benny’s combined experience of military service, teaching, mentoring students, serving on the Board of Police and Fire Commissioners as well as on the Indian Prairie District 204 School Board, in addition to the experience he has gained in the past very challenging four years on the Council, has prepared him well for his next term.”
Dr. Benny White is a retired Lieutenant Colonel who served 22 years in the United States Army as a Field Artillery Officer, leading, mentoring, and developing future leaders throughout his career before retiring from active duty in 2008. Over the years, he taught at the United States Military Academy at West Point and served as Professor of Military Science / Battalion Commander of the Reserve Officer Training Corps (ROTC) program at Wheaton College.

Benny White has a bachelor’s degree in Management Studies from West Point. He earned a master’s degree in Kinesiology from Indiana University, an MBA from Webster University, and a doctorate in Values Driven Leadership from Benedictine University.
Originally from Kansas City, Benny White and his high school sweetheart, Kim have been married for 33 years, and are actively involved in the Naperville community. They have two adult children. More information about the campaign is available at bennywhite.org

Indian Overseas Congress Condemns the Destruction of the Mahatma Gandhi Statue in California.

From suicide attempts to gold : Inspiring story of para-archer Rakesh

Much to Pakistan’s dismay and India’s delight, Saudi Arabia maintains…

Do you know WhatsApp has some lesser known features? Check these

Asia Cup to be postponed if India reach final of WTC: PCB

We have defeated a much more powerful enemy than Narendra Modi: Rahul Gandhi

‘You were on vacation then’: Amit Shah slams Rahul Gandhi for fisheries ministry remark

Congress collapsing across India due to dynasty politics: Amit Shah

What is Spaces feature? Twitter starts testing it on Android after iOS

McIlroy, Thomas to dress in red and black in honour of Woods

Hemang Dave and his stylish avatars

Hrithik on why he won’t get married again