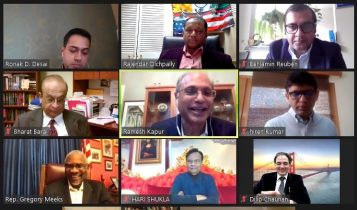 HI INDIA NEWS DESK
CHICAGO, IL -The Indian American Community organized a video meeting with Congressman Gregory Meeks on December 2nd with Congressman Raja krishnamoorthi’s help. The meeting was attended by US India Security Council President Ramesh Kapur, Bharat Barai, Rajendar Dichpally, American Jewish Community representative Nissim Reuben, Ronak Desai and constituents from the Congressional district of Mr.Meeks – Mr.Dilip Chouhan, Dr.Hari Shukla, Hiren Kumar and staff of the Congressmen Meeks and Raja krishnamoorthi. Congressman Meeks spoke about China challenge and also the Pandemic issue and the fact that most of the vaccines will be coming from India and USA needs to work with India with a special relationship. He said he looks forward to going to India again and recalled his earlier visit to India last year with his elder daughter. Mr.Meeks also recognized the contributions of Indian Americans to USA and the role they played in strengthening the bond between both the democracies. He said that he was influenced by Mahatma Gandhi’s role in shaping a plural world from South Africa and the influence it had on him and his ideal – Martin Luther King.

In the question and Answer session, Ronak Desai asked if there will be any major realignment in American policy post the Pandemic. Mr.Meeks spoke about the dialogue that is needed to be continued with China and also said that it was important to continue to work with friends like India for a stronger relationship as we move forward. Mr.Bharat Barai thanked Congressman Meeks for his support to US-India Civil Nuclear deal. He also offered to convey any personal message from Congressman to Indian Prime Minister Mr.Narender Modi. Congressman Meeks recalled his meeting with Prime Minister Modi in New York and said he looks forward to going to India again and help strengthen the bond between the two democracies. Ramesh Kapur spoke on the support from Congressman Meeks for increase in Trade relationship between USA and India. He said that President Obama and Vice President Biden had classified India as a Major Defense Partner and signed it in the NDAA agreement towards the end of 2016. Ramesh Kapur asked for Congressman Meeks support to operationalize the Export control Act so that India is classified as a NATO plus 6 country. He predicted that the Congressman will soon be elected as Foreign Relations Chair to the House Committee. Congressman Meeks said that he will work with Chairman Adam Smith (Armed Services Committee), Biden Administration and Tony Blinken (Secretary of State in Biden Administration) to make sure this law is changed in NDAA 2022.

The meeting ended with an agreement that the community will engage the Congressman closely for a better relationship once he is elected as chairman of Foreign Relation Committee in the House of Representatives.

Exceptional individuals who brought qualitative changes in others’ lives: PM on…