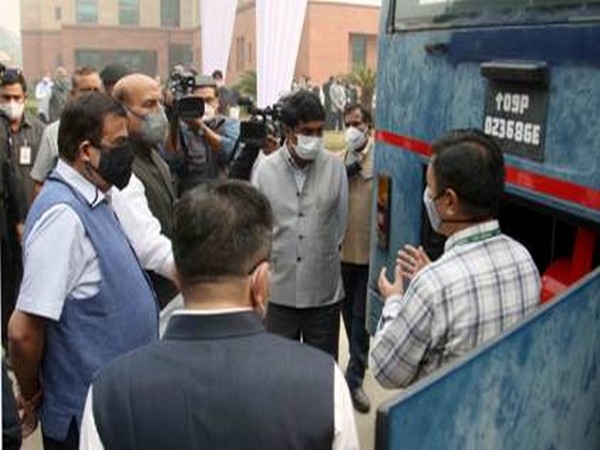 New Delhi [India], November 9 (ANI): Defence Minister Rajnath Singh and Minister for Road Transport and Highways Nitin Gadkari witnessed the demonstration of the Fire Detection and Suppression System (FDSS) developed by the Defence Research and Development Organisation (DRDO) for passenger buses, at DRDO Bhawan on Monday.
Demonstrations were given on water mist based FDSS for the passenger compartment and aerosol-based FDSS for engine fire in front of the two Union Ministers.
The technology, which can detect the fire in the passenger compartment in less than 30 seconds and then suppresses it in 60 seconds thereby reducing the risk to life and property to a significant extent, has been developed by DRDO’s Centre for Fire Explosive and Environment Safety (CFEES), Delhi.
The FDSS for the passenger compartment comprises of a water tank of 80 litre capacity, a 6.8 kg nitrogen cylinder pressurized to 200 bar installed at an appropriate location in the bus, and a network of tubing with 16 number of atomizers inside the passenger compartment. The FDSS for the engine comprises of the aerosol generator with which the fire suppression could be achieved within 5 sec of the system activation, as per the release.
While Singh appreciated the innovative accomplishment, Gadkari described its development as a significant step towards bus passenger safety. He also expressed satisfaction over the fact that fire safety has drawn the attention of DRDO and said that it would be very important to take forward the development.
Secretary DDR&D and Chairman DRDO, Dr G Satheesh Reddy also congratulated DRDO scientists for their success. (ANI)