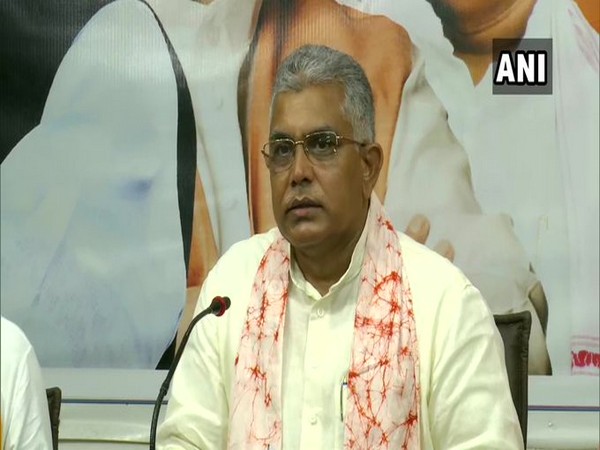 Kolkata (West Bengal) [India], November 9 (ANI): West Bengal BJP president Dilip Ghosh has served a legal notice to TMC MP Kakoli Ghosh Dastidar asking her to withdraw a tweet, in which she allegedly misquoted Ghosh over Matuas’ votes, and issue an unconditional apology.
According to the legal notice, Kakoli had allegedly misquoted Ghosh as saying “If Matuas talk a lot about citizenship, then we do not want Matuas’ votes. Matuas are blackmailing BJP regarding citizenship, we do not want their votes.”
Ghosh, in the legal notice dated November 8, asked Kakoli to withdraw the “false and fabricated publication”, publish a clarification indicating the incorrectness of the same and issue an unconditional apology within a period of three days.
“Please also note that in the event of your failure to act in terms of requests as above within the aforesaid period of three days, I have standing instructions, and shall be constrained, to take actions, in law, against your good self, which shall be at the risks and costs,” the notice said.
It said that the statements were neither stated nor have ever been suggested by my client ever nor has my client ever published any such purported statements in any forum, whatsoever.
“Surprisingly, however, your good self has sought to make, publish and quoted a false, frivolous, fabricated and malicious statement, signifying the same to have been stated by my client, with an intention to deliberately and consciously malign, disrepute and defame my client and to derogate the name, fame and reputation of my client as well as that of the Bharatiya Janata Party, West Bengal Unit in the expectation of the people at large,” the notice said.
“The above referred utterly malafide and malicious publication has resulted in my client having been subjected to public humiliation and disgrace. Your good self by way of the said publication has sought to purposefully canvas a negative image of my client as well as that of the BJP as a whole,” it added.
The notice alleged that the publication is intended, targeted and motivated to shudder the credibility of Ghosh and to disrepute him in the expectation of the people at large so as to serve the political interests of “your good self as well as that of others.” (ANI)

Rahul is a champion player and he will continue to open:…