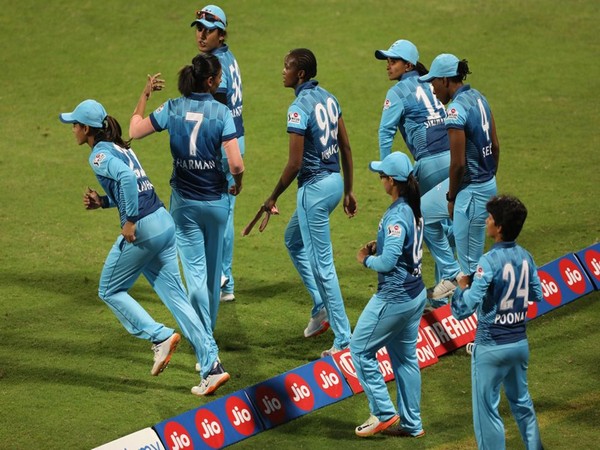 Sharjah [UAE], November 7 (ANI): Radha Yadav held her nerve in the final over as Supernovas defeated Trailblazers by two runs in the Women’s T20 Challenge here at the Sharjah Cricket Stadium on Saturday.
Trailblazers will now be locking horns against Supernovas in the finals of the tournament on Monday, November 9.
Chasing 147, Trailblazers openers Deandra Dottin and Smriti Mandhana put on 44 runs for the first wicket. Supernovas then got the big breakthroughs of Dottin (27) and Richa Ghosh (4) in the seventh over. Both these wickets were taken by Shakera Selman and Trailblazers were reduced to 48/2.
Smriti Mandhana and Deepti Sharma then put on 35 runs for the third wicket, but as soon as Trailblazers started gaining an upper hand, Supernovas struck back as Anuja Patil dismissed Mandhana (33), reducing Trailblazers to 83/3.
Deepti Sharma (43*) and Harleen Deol (27 ) got together at the crease in the 15th over and the duo put a stand of 52 runs to take Trailblazers near the finishing line. Trailblazers needed four runs off the final ball to win the match and Sophie Ecclestone managed to just get one run, and Supernovas managed to walk away with a victory by two runs.
Earlier, Chamai Athapaththu played a knock of 67 runs as Supernovas posted a total of 146/6 in the allotted twenty overs.
Opting to bat first, Supernovas got off to a good start as openers Chamari Athapaththu and Priya Punia put on 50 runs inside the first six overs. Both batters eventually stitched together a stand of 89 runs and finally, the partnership was broken in the 12th over by Trailblazers’ Salma Khatun as she dismissed Punia (30).
Harmanpreet Kaur then joined Athapaththu in the middle and the duo put on 29 runs for the second wicket, but Trailblazers came back strongly in the match as Harleen Deol dismissed Athapaththu (67) in the 17th over, reducing Supernovas to 118/2.
In the end, Harmanpreet Kaur played a knock of 31 runs to take Supernovas’ score past the run mark. For Trailblazers, Jhulan Goswami returned with the figures of 1-17 from her four overs.
Brief Scores: Supernovas 146/6 (Chamari Athapaththu 67, Harmanpreet Kaur 31, Jhulan Goswami 1-17) defeat Trailblazers 144/5 (Deepti Sharma 43, Harleen Deol 27, Shakera Selman 2-31) by two runs. (ANI)

Deepotsav will be held at Ram Janmabhoomi in Ayodhya for first time: UP Minister

Top trending query on Google India Search 2020 is… No,…