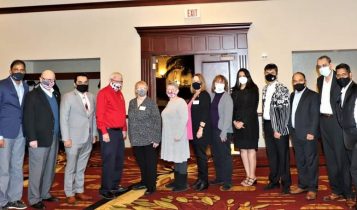 Mayor McLeod served as a Village Trustee for more than 20 years – many as Deputy Mayor. His interest in government and politics began as a boy in Chicago, and that interest has never wavered. Mayor McLeod successfully negotiated a boundary agreement with the Village of South Barrington – ending 40 years of acrimony. Mayor McLeod is a driving force behind the creation of the STAR LINE, a suburb-to-suburb commuter rail line, serving as Chair of the STAR LINE Steering Committee. Electrical service interruptions have been addressed, and the Village continues to work with ComEd to find and correct the problems resulting from an aging infrastructure. Mayor Mcleod has been a visionary unafraid of the tough problems. He breathed life into the Sears Centre, even before there was an inkling that Sears might consider abandoning its headquarters. He was able to engineer a new incentive package that kept Sears, and its jobs, here. It was no easy agreement given that there werew many stakeholders with varied interests. He has also expanded the village fireworks show at a time many towns were pulling back, sees the potential of the proposed National Veterans Museum and under his watch, Hoffman Estates has emerged from the shadows of its neighbors. He is the current president of the Northwest Municipal Conference and active with the U.S. Conference of Mayors and the National League of Cities. Mayor McLeod and his wife Joane live in the Westbury subdivision,

The evening kicked off with a welcome address by Mr. Neil Khot followed by speech by Mr. Sunil Shah, who in his speech asked the gathering to support Mayor McLeod in his next election, he also asked people at the gathering to spread the word in support of the Mayor amongst family and friends. All the speakers praised the tireless work that Mayor McLeod has put in over the years in Hoffman Estates praising his being approachable and his affable temperament while dealing with not just the constituents but also with people bringing up issues and problems.

All the speakers were thanked for their kind words and dinner was served at 8.30 P.M. The catering at the venue was organized by Northwest Marriot , Hoffman Estates.

The fundraiser was a success.