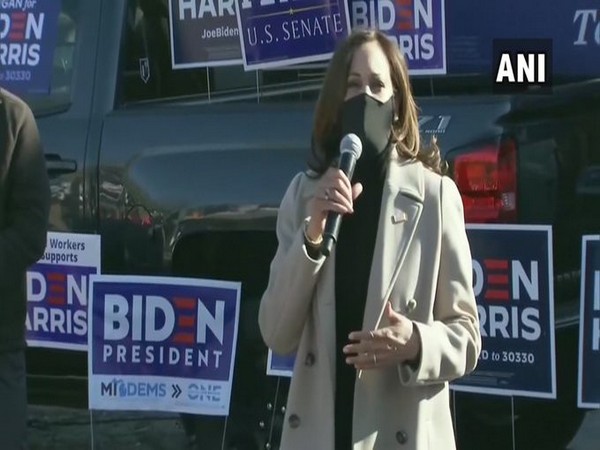 Michigan [US], November 4 (ANI): Kamala Harris, US Democratic Vice-Presidential candidate on Tuesday, said that she is “done talking” about US President Donald Trump and expressed confidence in her party’s presidential nominee, saying that she is looking forward to elect Joe Biden as the next president.
“I am at a point now that I am done talking about the guy in the White House. We need to do that. Let’s talk about the opportunity that is in front of us which is to elect Joe Biden,” Harris said during the last-day appeal to voters in Michigan.
“Think about long-overdue reckoning on racial injustice in the US. Joe has the courage to say ‘Black Lives Matter’. He understands it may be difficult to think about/speak up/hear but we’ve to confront the truth of things. Need to deal with racial disparities,” she added.
The US vice-presidential candidate urged people to vote, saying that “everything is at stake” in the 2020 presidential elections.
“I believe there are three reasons that people should vote. We must honour their ancestors. Let’s honour the fact that we just celebrated the 100 years of 19th amendment which gave women the right the vote.” “Reason number two: Everything is at stake, including the future of our democracy,” she added. She further alleged that “attempts are being made to make it difficult for the folks to vote but people must vote.”
She appealed to the voters to exercise their right and set examples for their children and grandchildren. “This moment will pass and years from now our children and grandchildren will look in our eyes and ask where were you at that moment? And what we should be able to tell them is soo much more than how we felt…what we will tell them is what we did.”
Prior to the public address, when asked ‘how are you doing about your chances today’, she told reporters that, “The day isn’t over. Ask me after poll is closed, maybe I’ll have a better idea but right now I’m here to remind people to vote as the election is still happening, it’s not over.” (ANI)

US Elections 2020: Surveillance beefed up on streets near White House

US eliminated from Davis Cup Finals after loss to Colombia