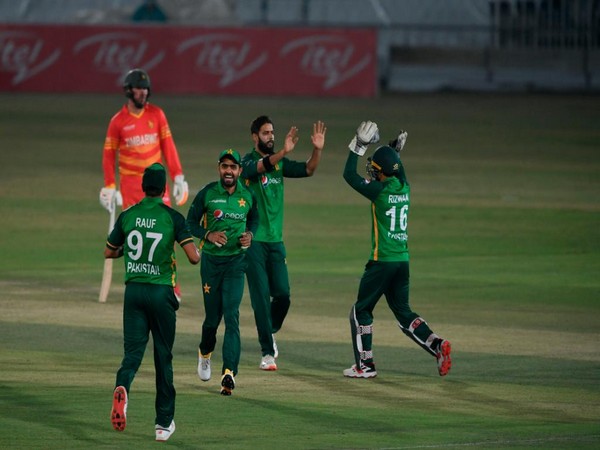 Rawalpindi [Pakistan], October 30 (ANI): Shaheen Shah Afridi’s fifer and Wahab Riaz’s four-wicket haul helped Pakistan beat Zimbabwe by 26 runs in the first ODI of the three-match series here at Rawalpindi Cricket Stadium on Friday.
Chasing a moderate target of 282, the visitor’s lost two early wickets as both the openers — Brian Chari (2) and skipper Chamu Chibhabha (13) — were sent back to the pavilion by Afridi.
Craig Ervine and Brendan Taylor then stitched a 71-run partnership for the third wicket. The former departed after playing a knock of 41 runs. Sean Williams (4) failed to leave his mark on the scoreboard and was sent back to the pavilion by Riaz, reducing the side to 4/115 in 26.4 overs.
Wesley Madhevere joined Taylor in the middle and built a 119-run stand for the fifth wicket. The duo helped the side to get past the 200-run mark. Madhevere was dismissed by Riaz in the 46th over.
Madhevere smashed 55 runs including seven fours. After his dismissal, the tourists lost wickets at regular intervals and the team was bundled out at 255 in 49.4 overs.
The side was reduced from 240/6 to 255/10 in just four overs. Taylor was the highest scorer for the side as he played a knock of 112 runs studded with three sixes.
For Pakistan, Afridi returned to the figures of 5-49 while Riaz scalped four wickets.

Earlier, Pakistan won the toss and elected to bat first. Haris Sohail and Imam-ul-Haq accumulated 71 and 58 runs respectively and steered the side to 281/8 in their 50 overs.
Imad Wasim played an unbeaten knock of 34 off 26 balls.
For Zimbabwe, Tendai Chisoro and Blessing Muzarabani clinched two wickets each. (ANI)