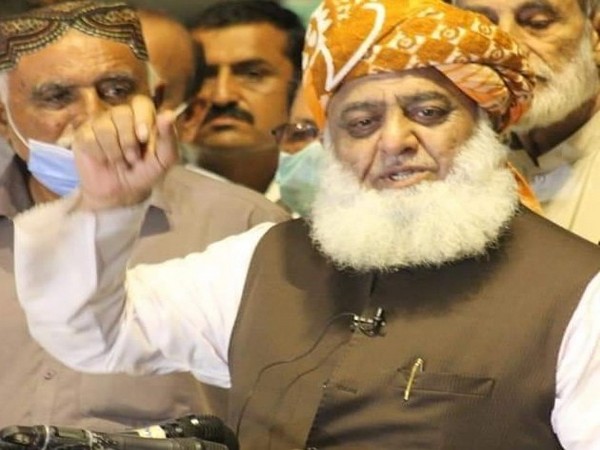 Islamabad [Pakistan], October 31 (ANI): Jamiat Ulema-e Islam-Fazl (JUI-F) chief Maulana Fazlur Rehman on Friday demanded that the Pakistan Election Commission should hold fresh elections as the Pakistan Democratic Movement (PDM) want no dialogue with Prime Minister Imran Khan-led Pakistan Tehreek-e-Insaf (PTI) government.
“Neither we are ready to hold any negotiations [with the government], nor we are in its favour,” Rehman told the media at a presser here on Thursday, reported Dawn.
Targeting the Imran Khan government, Rehman said that it had touched the bottom, in terms of its performance and with regard to ethics, while referring to PML-N leader Captain Safdar’s arrest in Karachi, which he called a conspiracy to divide the opposition.
He also endorsed the reaction of Karachi police, where several officers applied for leave, calling it ‘effective’.
“We will continue holding public gatherings despite the threat of bomb blasts. We have to take careful decision regarding Gilgit Baltistan,” Dawn quoted Rehman, while he announced a huge rally in Multan on November 30.
The JUI-F chief also alleged that by granting amnesty to the chairman of the China-Pakistan Economic Corridor (CPEC) Authority, a legal way was being paved to commit corruption.
China’s trust had been damaged with regard to handling of the CPEC affairs by the government, he added.
Rehman further opined that putting restrictions on the media and pressurising other institutions was a “dictatorial act”.
He also cornered the PTI government by expressing regret that so far the government had failed to give any concrete response to the recent blast in a Peshawar school in which innocent children were killed.
The PDM has organised three mammoth rallies in Gujranwala, Karachi and Balochistan as part of countrywide agitations, demanding the resignation of Imran Khan.
Earlier, the police had “arrested” Safdar Awan, from the hotel they were staying in Karachi, hours after the PML-N vice-president had lashed out at Imran Khan and the PTI government at the second power show of PDM.
“Police broke my room door at the hotel I was staying at in Karachi and arrested Capt. Safdar,” Maryam tweeted early Monday.
Several police officers on Tuesday applied for leave in order to “come out of the […] shock” caused by the registration of an FIR and arrest of Safdar, according to Dawn. (ANI)