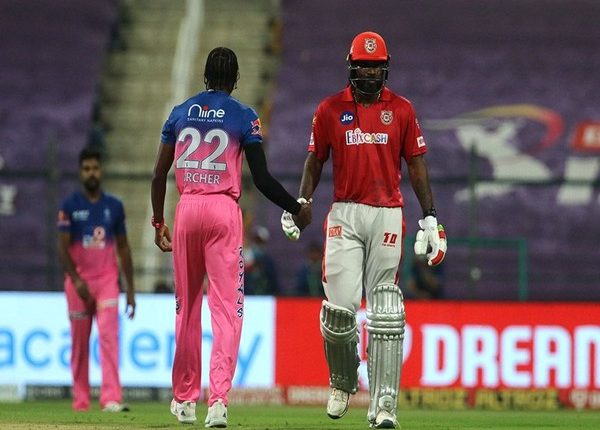 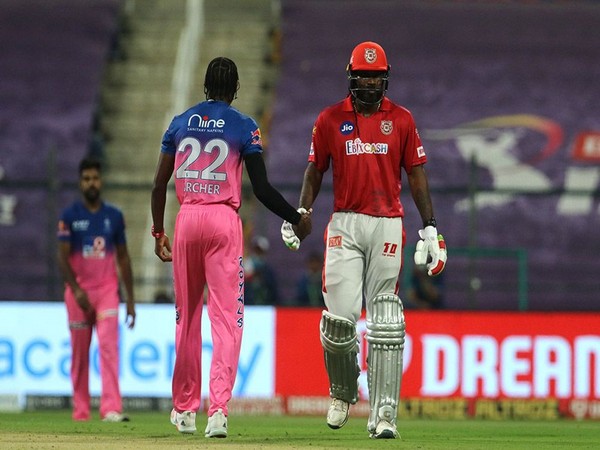 Abu Dhabi [UAE], October 30 (ANI): While Chris Gayle hit his 1000th six in his T20 career on Friday at the Sheikh Zayed Stadium against Rajasthan Royals (RR), he could not manage a much-deserved century as he was dismissed by Jofra Archer on 99 and Kings XI Punjab (KXIP) finished on 185/4 in their 20 overs.
Coming in at the fall of Mandeep Singh’s wicket in the opening over, Gayle added 120 runs for the second wicket with skipper KL Rahul as the two took the RR bowling apart. But Rahul was dismissed against the run of play for 46 and while Nicholas Pooran did play a cameo (22 off 10 balls), it was not enough for KXIP to cross the 200-run mark.
For RR, it was once again Archer who stole the show with the ball as he finished with figures of 2/26 from his four overs. All-rounder Ben Stokes who had earlier taken a brilliant catch to send Mandeep packing, also picked two wickets from his four overs.
Gayle though was the star of the first half and said that he felt 185 is a good score. “It was a good knock, I thought 180 is a good total and it’s a good wicket. It will get better in the second innings,” he told the host broadcasters during the mid innings break.
Commenting on getting out on 99, Gayle said that it was unfortunate but these things happen. “Getting out on 99 is unfortunate, these things will happen but it was a good ball, still feeling good. To be honest, it’s all about the mental aspect of my game and that’s what keeps me going. I’m enjoying the cricket the same way. I’d love to have the IPL trophy under my belt, but still a long way to go.”
“It’s an important game for us. Want to win this. I’ve been having fun out there batting with youngsters and it’s a good thing. I don’t know the record (about the 1000 sixes), I’m still hitting it well. The hard work and dedication over the years have paid off. To the guys who I promised to get a century, I missed out today but in my mind, it’s a century,” he smiled. (ANI)

We hail India’s decision to let us open single-brand…

Tibetans in exile vote in India for their political leader