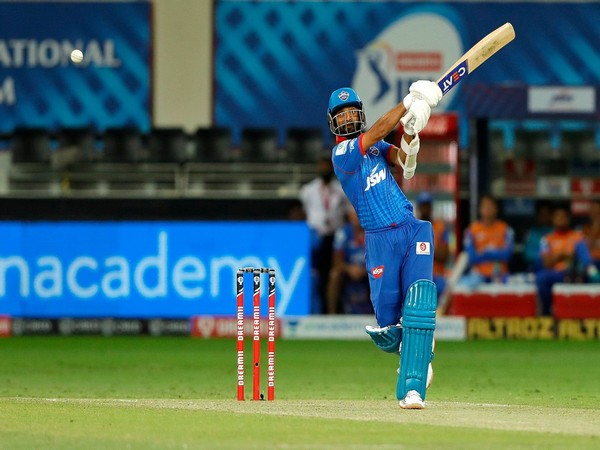 Dubai [UAE], October 30 (ANI): Ahead of the game against Mumbai Indians, Delhi Capitals batsman Ajinkya Rahane said that each and every individual is capable of winning the game for the team.
Despite three losses, Delhi Capitals (DC) are still in the top four of the points table, courtesy of their successful run in the initial phase of the tournament.
Speaking on the current situation, DC’s opener Ajinkya Rahane reckoned that three losses do not make his team a bad one and these kinds of things happen in big tournaments like IPL.
“I think we started off really well, won seven out of nine games initially, and then the last three games were not as per what we wanted, but this is going to happen in a tournament like IPL. You play fourteen league games, it’s a big tournament, and it’s all about staying in that contest, staying in the journey, and learning from each and every game. I think the upcoming two games are really important, and it’s all about staying positive. Three losses don’t make us a bad team. It’s all about playing to our strength and backing each and every individual. As a team, we are really looking forward to playing against Mumbai now and then RCB,” Rahane said in the franchise’s official release.
Commenting on head coach Ricky Ponting’s way of tackling this kind of pressure situation after back-to-back defeats, the 32-year-old batsman said, “He’s (Ricky) been really fantastic. I have personally really enjoyed working with him. He is always been positive, and he told us to play positive cricket. We were just thinking about playing one game at a time, sometimes what happens is when you think about yourselves and the outcome, you put yourself under pressure, so I think it’s all about giving your best in the middle, whichever game you are playing, doesn’t matter if it’s your first game or a playoffs game. It’s all about playing as a team, so that has been the talk.”
Talking about the penultimate game against Mumbai Indians (MI), who have already qualified for the playoffs, Rahane said the team will play as a unit against a strong opponent.
“Mumbai are a good team, they are a strong team and we know their past as well. I mean, they did so well in IPL. For us, what is important is to play to our strength, what we have been doing, and it’s all about giving our best tomorrow. Each and every individual is capable of winning the game for our team, so I think we should believe in that and believe in our ability,” said Rahane.
“They play as a team and we all know that they play as a unit and we know how strong they are. So, for us, it’s all about playing as a unit against Mumbai Indians tomorrow and play to win,” added Rahane ahead of the match in Dubai.
The Mumbai-born batsman also spoke about how a three-day break in between the matches was helpful to him and the team.
“Sometimes it does help, you can actually reflect what went wrong, especially last three games. You can actually think about it and learn from your mistakes. It does help mentally and physically also. You get a break, switch off completely, and think about your own preparations and what your team needs from you. I believe in that (the break), it’s all about how you take it. After losing a game, you always learn a lot. In fact, after each and every game, I always believe that you learn something or the other,” signed off Rahane. (ANI)

Hand of friendship only if Pakistan stops terror: Gen Rawat