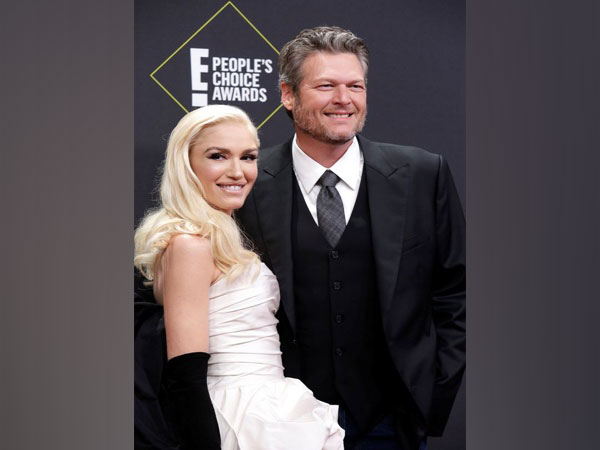 Washington [US], October 30 (ANI): American singer Blake Shelton’s proposal this month to songstress Gwen Stefani was a total surprise to the ‘No Doubt’ singer but she couldn’t be happier to say “yes please!”
According to People Magazine, two days after the couple announced their engagement, a source told the outlet that the 51-year-old singer is “ecstatic” to be the country star’s fiancee.
“Gwen is ecstatic. The proposal was a surprise. Gwen and Blake kept the proposal quiet for a few days, but were very excited to share,” said an insider.
The duo, who have been dating since falling in love on the set of The Voice in 2015, revealed the happy news with matching Instagram posts on Tuesday.
“@blakeshelton yes please! gx” Stefani wrote in the caption for a photo from the engagement, holding up her new ring and giving Shelton a smooch on the lips.
The 44-year-old singer sweetly wrote in his caption that Stefani saved “the rest” of his life.
“Hey @gwenstefani thanks for saving my 2020… And the rest of my life.. I love you. I heard a YES!” he wrote, sharing the same photo.
Hours later, Shelton said on Twitter that he and Stefani “are extremely excited” to get married.
As per People Magazine, the pair – who have been quarantining in Oklahoma amid the novel coronavirus (COVID-19) pandemic with Stefani’s sons 14-year-old Kingston, 12-year-old Zuma and 6-year-old Apollo – have been known to join musical forces by collaborating on several duets.
Their projects together include ‘Nobody But You’ – which hit No. 1 on Billboard’s Country Airplay chart – and ‘Happy Anywhere’ from earlier this year.
Stefani and Shelton also dropped holiday song ‘You Make It Feel Like Christmas’ and ‘Go Ahead and Break My Heart’ from Shelton’s 2016 ‘If I’m Honest’ album.
Earlier this month, the duo won the CMT Music award for best collaborative video for ‘Nobody But You,’ a project that Shelton said “brought [them] closer together.”
He told Entertainment Tonight after the win, “We’ve been together now for five years, believe it or not.We’ve worked together and we’ve written together. So at this point in our relationship, we’re always looking for what’s the next thing that we haven’t accomplished yet.” (ANI)

Lucky to get a direct hit: Guptill on Dhoni run out

Vivek Oberoi: My film on Indian Air Force should inspire…