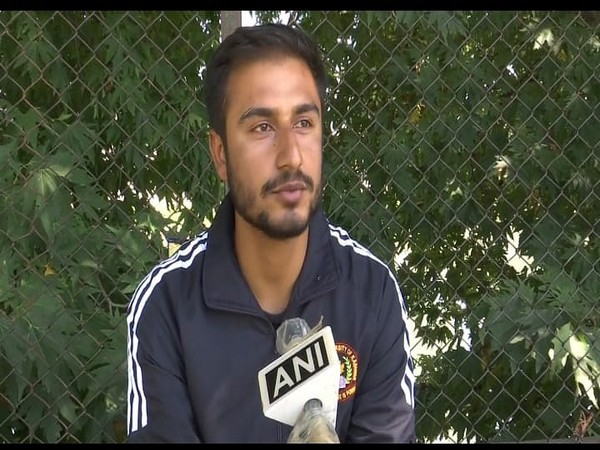 Ganderbal (Jammu and Kashmir) [India], October 31 (ANI): Afaaq Rahim, a budding football player-cum-trainer from Ganderbal district of central Kashmir, trains and encourages the younger generation of the Valley to inculcate the habit of playing a sport.
Afaaq has done his Bachelor in Physical Education from Physical College Ganderbal and he is currently pursuing his Masters in Physical Education. The footballer’s next aim is to boost the football culture in Ganderbal district.
Afaaq, who grooms young talent in Ganderbal district, wants to join the National Institute of Sports, Patiala for a football certified coaching programme. He aims to become a certified football coach.
“I am in the third semester of my masters. After that, I want to go to NIS for a coaching license so that I can take my district forward in football. Now the youth have got facilities but they don’t come and play. If a person is associated with sports, it helps in his overall grooming along with health benefits,” Afaaq told ANI.
Afaaq started his football journey when he was in Class 5. He performed brilliantly and was selected to represent his state.
“I started my football journey when I was in fifth class. My coach promoted and encouraged me to play football. He taught and guided me. Under his guidance, I represented my district Ganderbal in an under-14 tournament. After that I got selected for the state,” said Afaaq.
“In Jammu, I attended a five-day camp, and seeing my performance, I got selected at the national level. So I represented Jammu and Kashmir at the national level. Then I came back, I started my football here and a club named ‘Rebels Ganderbal’ was set up here. I represented that club in under-17 and under-19,” he added.

Afaaq’s brother says their family always supported him in pursuing his passion for football. (ANI)

One terrorist killed in encounter at J-K’s Pulwama