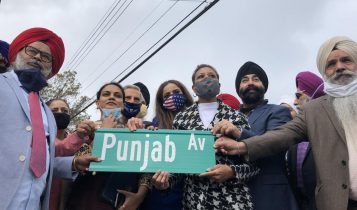 QUEENS, NY- A street in a Queens, New York, community has been renamed to honor the Indian American and larger South Asian community that resides there.

The Queens community came together on Oct. 23 to witness the installation of the new local landmark as the intersection of 101st Avenue and Lefferts Boulevard in Richmond Hill was officially given a new name, according to reports.

The street has now been named Punjab Avenue as a part of a celebration commemorating the contributions made to Queens by its South Asian residents.

“Today is a celebration of our great multicultural mosaic. It is so important that diverse communities like ours see themselves and their cultures represented in the historical landscape and we see the Punjabi community in every corner of Richmond Hill and our city as a whole,” said City Councilwoman Adrienne Adams, according to reports.

“Today is a celebration meant to unite. We are one district. We are one people. And we must have unity in our entire community,” Adams added.

The ceremony continued with speeches from Assemblyman David Weprin alongside leaders of the borough including members of Queens Community Board 9, Sikh Cultural Society president Jatinder Singh Boparai, and other community leaders who each extended their support for the street sign unveiling, reports noted.

“One of the reasons why Punjab Avenue was picked up as a street name was because we as a Punjabi represent a diversity back home in Punjab and we represent diversity right here in Richmond Hill,” said Toor in a QNS.com report. “This opportunity, this dream we always carried with us to be part of the fabric of this amazing city,” he said.

Jenifer Rajkumar, the Democratic nominee for state Assembly District 38, was also in attendance and said she was “filled with pride.”

“I am a proud American, and most of all I am a proud Punjabi American. I stand before you today as the first Punjabi soon-to-be elected to the New York state Assembly. I cannot think of a better way to celebrate that than coming here and celebrating the opening of Punjab Avenue,” Rajkumar said in the report.

The event culminated with Rajkumar joining elected officials and community leaders in pulling down the street covering to reveal the brand new street sign, it said.