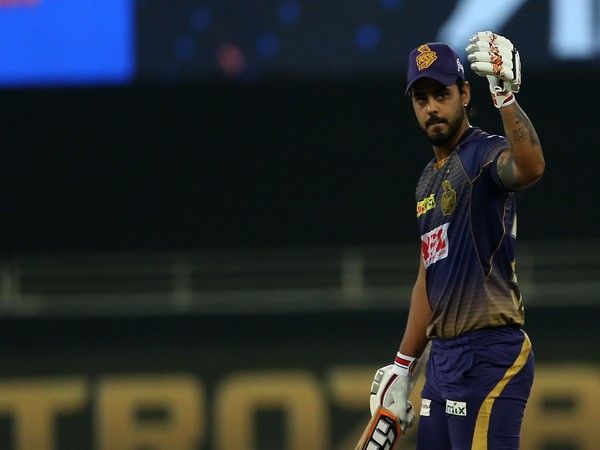 Dubai [UAE], October 29 (ANI): Kolkata Knight Riders (KKR) opener Nitish Rana played a knock of 87 runs as his team posted a total of 172/5 in the allotted twenty overs against Chennai Super Kings (CSK) here at the Dubai International Stadium on Thursday.
Sent into bat first, KKR got off to a steady start as openers Rana and Shubman Gill put on 48 runs inside the first six overs. Both batsmen eventually stitched together an opening stand of 53 runs, but finally, the stand was broken by Karn Sharma as he clean bowled Gill (26) in the eighth over.
Sunil Narine (7) was promoted to the number three slot in order to gather some quick runs, but the move backfired as he was sent back to the pavilion by Mitchell Santner, reducing KKR to 60/2 in the ninth over.
Rinku Singh was sent at number four and he along with Rana put together 33 runs for the third wicket. Ravindra Jadeja dismissed Singh (11) in the 13th over, reducing KKR to 93/3.
In the 16th over, Nitish Rana took Karn Sharma to the cleaners as the left-handed batsman smashed him for 19 runs. In trying to get some quick runs, Rana (87) perished off the bowling of Lungi Ngidi and as a result, KKR was reduced to 137/4 in the 18th over.
Dinesh Karthik came into bat next and he played a cameo knock of 21 runs off just ten balls and as a result, KKR posted a score of more than the 170-run mark. For CSK, Lungi Ngidi scalped two wickets.
Brief Scores: KKR 172/5 (Nitish Rana 87, Shubman Gill 26, Lungi Ngidi 2-34 (ANI)