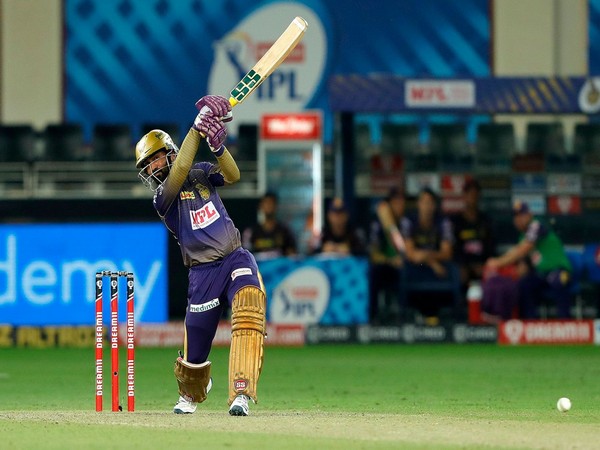 Dubai [UAE], October 29 (ANI): Buoyed by Nitish Rana’s 87 and a quickfire knock from former skipper Dinesh Karthik (unbeaten 21 off 10 balls) helped Kolkata Knight Riders (KKR) finish on 172/5 in their 20 overs against Chennai Super Kings at the Dubai International Cricket Stadium on Thursday.
While KKR did score 65 runs in the last five overs, Chennai Super Kings pacer Lungi Ngidi finished with 2/34 from his four overs as the CSK bowlers struggled to pick wickets. KKR also were not helped by their decision to hold Morgan (15 off 12 balls) back and send Rinku Singh ahead of him.
Ultimately it required some smart hitting from Karthik to help KKR post a total that their bowlers should be happy with.
“It’s a decent score, we got to definitely bowl well. I am sure the bowlers will do well if they bowl in the right areas,” Karthik told the host broadcasters during the mid innings break.
Commenting on his own batting position and his role to finish the innings, Karthik said: “I think I have gone well at the back end of the innings, that’s what they wanted me to do. So I am happy to do that.”
But the star of the show definitely was Rana as he missed out on a well-deserved century. And Karthik said that the opener has the potential to score big once he settles down.
“Rana is a terrific talent. Happy for him. He’s a guy who can score big if he’s set. He’s always been among the runs,” he said. (ANI)

Will Kerala find a berth in Modi cabinet?

ISL ties up with Twitter to launch new fan experience