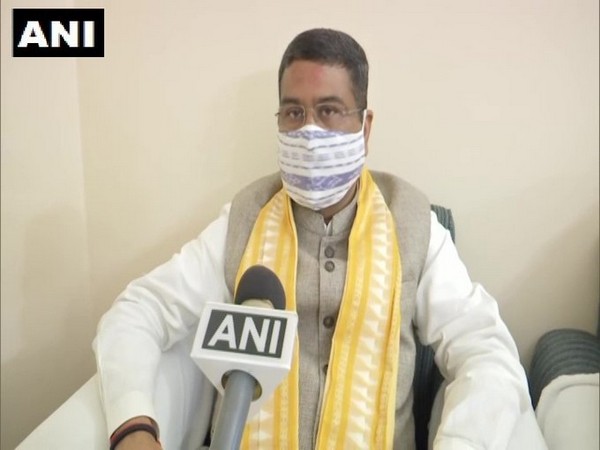 Patna (Bihar) [India], October 29 (ANI): Union Ministers Dharmendra Pradhan and Giriraj Singh on Thursday sought an apology from Congress leader Rahul Gandhi over his past remarks about “who benefitted the most” from the Pulwama terror attack after Pakistan Federal Minister Fawad Chaudhry on Thursday admitted the country’s role in the incident.
The Pakistan Minister said “Pulwama was achievement under leadership of Imran Khan” and that “Hindustan ko ghus ke maara hai”.
Pradhan referred to remarks of Pakistan minister and said Congress had raised questions over India’s response concerning the terror attack.
He also recalled remarks of Pakistan Muslim League-N (PML-N) leader Ayaz Sadiq in the country’s national assembly on Wednesday that Pakistan Army Chief Qamar Javed Bajwa’s “legs were shaking” while Foreign Minister Shah Mahmood Qureshi told the meeting of parliamentary leaders in February 2019 that India was about to attack their country and Indian Air Force pilot Abhinandan Varthaman should be released.
“Congress was saying Pakistan attacked us and was asking questions on our response. But a member of Pakistan assembly discussed that in a meeting for releasing Abhinandan there was panic among officials that he should be released or India can do anything,” Pradhan told ANI.
“Rahul Gandhi should apologize to the people of the country. The Congress party should feel ashamed that they showed lack of faith on the soldiers and the system,” he added.
Giriraj Singh said opposition leaders including Rahul Gandhi had raised doubts on the capabilities of Army and questioned surgical strikes. “Today Pakistani leaders are giving proof in their (national) assembly. They (opposition and Rahul Gandhi) should apologize to the people of India,” Singh said.
In an official acknowledgement of its role in Pulwama terror attack, Chaudhry said: “We hit India by entering inside. Our achievement in Pulwama is the achievement of the entire community under the leadership of Imran Khan. You all also have credit (for it).”
The dastardly terror attack on a CRPF convoy in Jammu and Kashmir’s Pulwama district on February 14, 2019 claimed the lives of 40 personnel. Terrorists rammed an explosive-laden vehicle in the bus. The convoy had of 78 buses in which around 2,500 personnel were travelling from Jammu to Srinagar.
Pakistan-based terrorist group Jaish-e-Mohammed (JeM) had claimed responsibility for the Pulwama terror attack. Pakistan had repeatedly denied responsibility for the attack.
Days later India carried out airstrike on JeM’s Balakot terror training camp in Pakistan.
India had also withdrawn the Most Favoured Nation (MFN) status to Pakistan following the terror attack. It had said that the External Affairs Ministry will initiate all possible diplomatic steps which have to be taken to ensure isolation of Pakistan for having a direct hand in the incident.
The international community had expressed its strong support to India in the wake of the terror attack. (ANI)