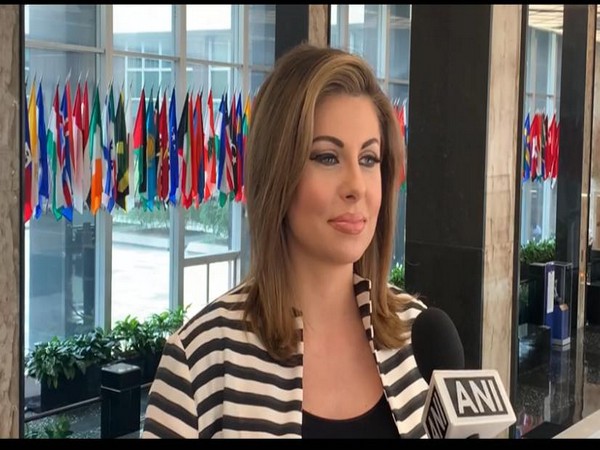 By Reena Bhardwaj
Washington [US], October 29 (ANI): The United States on Wednesday (local time) called out China for breaking its “promises” to Hong Kong and Taiwan and asked Beijing to be transparent and allow an investigation in the COVID-19 emergence from Wuhan province.
Speaking to ANI, US State Department’s spokesperson, Morgan Ortagus, said that China is the strategic competitor of the US on many levels.
Tensions between the US and China have escalated in the recent months over a range of issues including COVID-19 emergence, Hong Kong security law, Washington support to Taiwan, Indo-Pacific region.
“China, we have made no secret in the Trump administration that they are a strategic competitor on many levels. There are some areas in which we do have to work with China and we have been able to work with them, especially on establishing the new phase one trade agreement. But for the most part, you know again we have seen that there are global challenges and challenges in Asia, where the Chinese Communist Party quite frankly have broken their promises. They have broken their promises in Hong Kong. They have broken them in Taiwan,” she said.
“We know that this COVID-19 virus that we’re all dealing with, you know, is something that emanated from China. We continue to call on them and to be transparent to be open to allow scientists and doctors in to investigate. That’s something that still hasn’t happened and something that we are going to continue to call for because we have to fight these global pandemics together,” she added.
Recently, Chinese foreign ministry announced that the country will impose sanctions on Lockheed Martin, Boeing Defense, Raytheon and other U.S. companies it says are involved in Washington’s arms sales to Taiwan
Beijing considers Taiwan a wayward province it has vowed to bring under control, by force if necessary.
Meanwhile, in Hong Kong, China imposed the new national security law after repeated protests there demanding more democracy and less Chinese influence. The US has expressed its discontent with the law and the Chinese Communist Party’s actions in the city.
The new law targets secession, subversion and terrorism with punishments of up to life in prison. With the imposition of the law, China has broken its promise to Britain on the handover of Hong Kong in 1997 to preserve the concept of “one country, two systems” for 50 years.
Speaking about the recently held 2+2 India US inter-ministerial dialogue, Ortagus said that Washington and New Delhi have reaffirmed that they are committed to the free and open Indo-Pacific region and that is “really important” in the era of global competition.
“So we know that both of our countries reaffirmed that we are committed to the free and open Indo-Pacific, and that’s really important as we enter this era of global competition. One of the things that are going to be crucial and fundamental is freedom of navigation, freedom of the seas, free flow of trade of goods, and exchange of ideas,” Ortagus said.
During 2+2 dialogue, India and US welcomed the growing understanding on the Indo-Pacific among like-minded countries and emphasized that the Code of Conduct in the South China Sea should not prejudice the legitimate rights and interests of any nation in accordance with international law.
A Joint Statement on the third India-US 2+2 Ministerial Dialogue said the two countries reiterated their commitment to maintaining a free, open, inclusive, peaceful, and prosperous Indo-Pacific region built on a rules-based international order.
India and US signed five key agreements during the 2+2 India-US ministerial-level dialogue including Basic Exchange and Cooperation Agreement (BECA) which will allow India real-time access to precision data and topographical images from the United States military satellites. (ANI)

Sex education should begin as early as age 10: Research