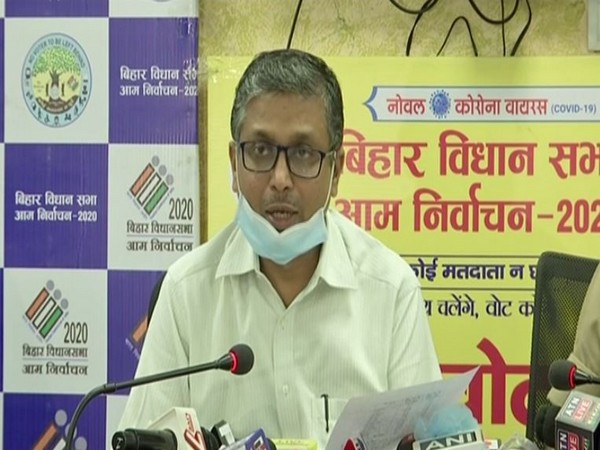 Patna (Bihar) [India], October 28 (ANI): Banka district in Bihar recorded the highest voting percentage in the first phase of assembly polls in Bihar on Wednesday with the overall voter turnout reported at 53.54 per cent, according to state Chief Electoral Office.
An official release said Banka district recorded 59.57 per cent voting while the lowest voting percentage was witnessed in Munger at 47.36 per cent.
It said Jamui witnessed 57.41 per cent voting, Gaya 57.05 per cent and Kaimur (Babua) 56.20 per cent.
The release said a total of 159 persons have been detained under preventive measures.
The fate of 1,066 candidates will be decided in the first phase of the elections, which includes 952 male and 114 female candidates.
At a press conference held earlier in New Delhi, Chief Election Commissioner (CEC) Sunil Arora had thanked the voters, political parties and the local administration for the smooth conduct of the first phase of elections.
Bihar is the first state going to polls under conditions created by COVID-19.
Deputy Election Commissioner Sudeep Jain that the overall functioning of the EVMs had been very satisfactory today barring some problems in the Jamui constituency.
“The failure today has been only 0.22 pc in the ballot units. From 41,689 ballot units, only 0.22 pc had to be replaced. It was 0.25 pc in the control and 1.28 per cent of VVPATs had to be replaced out of 31,371,” he said.
“At Jamui, due to longer time taken for replacement in 12 polling stations the polling time had to be extended to 7 pm. Apart from this, no other complaints of any kind were received with respect to working of EVMs and VVPATs,” he added.
Eighty-nine cases of violations were registered under sections of IPC and NDMA Act related to violation of COVID-19 norms in the first phase of polls, another official said. (ANI)

Sasi plea being processed by brass of K’taka jail dept:

Under what power did you direct banks to freeze Amnesty a/cs, K’taka HC asks ED

How well do Hindu temples in America serve the needs of…