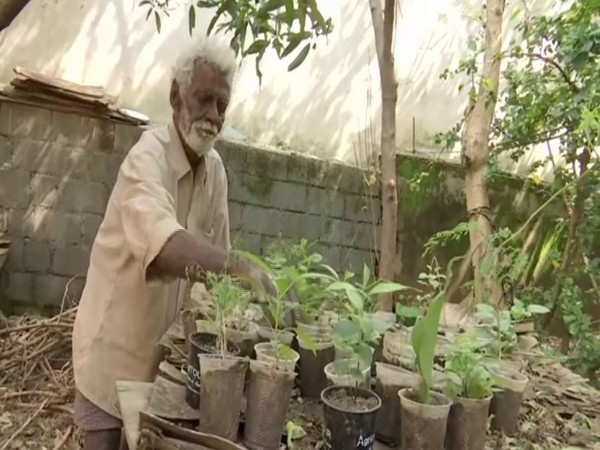 Bengaluru (Karnataka) [India], October 29 (ANI): A picture changed the life of Revanna Siddappa, a 79-year-old man who sells medicinal saplings on the roadside in Bengaluru.
Revanna Siddappa sells saplings keeping it on the surface of the road. When the picture of Siddappa sitting on the road and selling plants became viral, a few residents provided him with a table, chair and umbrella.
While speaking to ANI, Revanna Siddappa said, “I am 79 years old and I used to sell medicinal plants on the roadside of Kanakpura road. Somebody noticed me and took a picture and put it everywhere.”
“After that, I got so much help from people. I got a table to keep saplings, a chair and an umbrella. Earlier, I used to sell around five saplings but now the number has doubled,” he added.
Siddappa further said that he sells plants at the cost of Rs 20-30 range.
“I have been selling plants for the last 3 years. I do not want to take loan money from anyone. I will earn on my own,” he said.
He quoted a saying of Sarvajna that it will be nice while taking a loan but will be a huge task while repaying it. (ANI)

NDA government of FDI, by FDI, for FDI: Mamata

Shweta Rohira planning to surprise Salman on his birthday