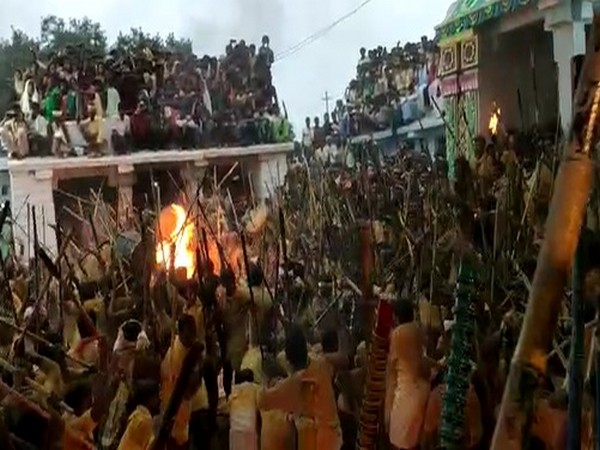 Kurnool (Andhra Pradesh) [India], October 27 (ANI): About 50 persons sustained injuries when people participated in a stick fight as part of the Banni festival.
Banni festival is held in Devaragattu and surrounding villages in Kurnool district and as part of this festival, people fight with sticks to get hold of ceremonial idols of local deities.
Every year this festival is held on the day next to Vijay Dashmi. However, this year district administration has ordered a ban on conducting the stick fight festival in the wake of the COVID-19 pandemic.
Despite police restrictions, the imposition of Section 144, and setting up check posts everywhere; people did not stop. By 10:30 PM a huge number of people accumulated and started fighting with sticks.
The police were unable to stop the participants. The fight continued until the wee hours of this morning. Almost 50 persons are injured during the event.
Earlier it was reported that traditional stick fight celebration called ‘Banni festival’ was cancelled this year at Devaragattu village in Kurnool district in the wake of COVID-19 pandemic.
The police had set up 11 check posts at Andhra Pradesh-Karnataka borders, cancelled Karnataka RTC bus services for Aluru, Holagonda and Halaharvi Mandals for that day.
Police had also imposed Section 144 in Devaragattu and surrounding areas. (ANI)

If BJP wins in Assam, RSS will take over governance: Rahul

Sonakshi Sinha not into cricket