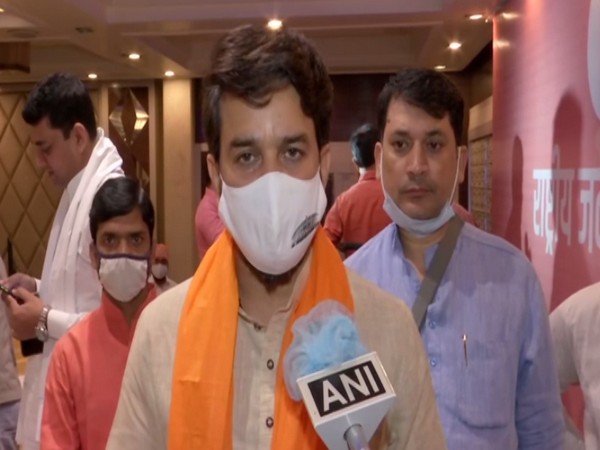 By Sahil Pandey
Patna (Bihar) [India], October 27 (ANI): Union Minister Anurag Thakur on Tuesday said that nobody trusts Lok Janshakti Party (LJP) chief Chirag Paswan and the National Democratic Alliance has nothing to do with his party.
“Nobody trusts Chirag Paswan and his party is not in alliance with us. NDA has nothing to do with LJP. NDA chief minister will be Nitish Kumar. We will form the government with full majority,” Thakur told ANI here.
The Union Minister also took a swipe at Mahagathbandan’s chief ministerial candidate Tejashwi Yadav and said the Lalu scion cannot be trusted and has sided with the Tukde Tukde gang.
“How can people believe RJD? Tejashwi, who removed the photos of his parents from the posters, can do anything. The person who is close to the people who commits genocide and is with Tukde Tukde gang and doing caste-based politics and divisive politics. Bihar people have understood that jungle raj can come back. Bihar parents will caution their kids that if they vote for him then jungle raj can come,” Thakur said.
Meanwhile, BJP leader from Karnataka Tejasvi Surya praised Chirag Paswan on Monday as an “energetic” leader and a “special friend”.
“Chirag Paswan is a very energetic leader. In parliament, he raises issues of Bihar complete with statistics. He is a well-known youth leader, a special friend and I wish him the very best,” he said. (ANI)

LetsShave – The product women miss the most during…