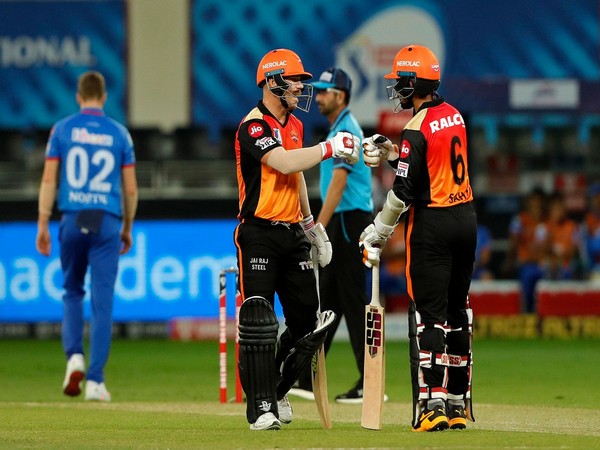 Dubai [UAE], October 27 (ANI): David Warner and Wriddhiman Saha were seen at their devastating best as SunRisers Hyderabad register the highest powerplay score for any team in the ongoing edition of the Indian Premier League (IPL) 2020.
Both the batsmen helped SRH post 77 runs inside the first six overs against Delhi Capitals here at the Dubai International Stadium. Wriddhiman Saha was the one who started the onslaught as he took on Delhi’s main bowler Kagiso Rabada.
As soon as Ravichandran Ashwin came to bowl in the third over of the innings, David Warner went into overdrive and started showing off his big-hitting skills.
In the final over of the powerplay, David Warner smashed 22 runs off the over bowled by Kagiso Rabada, and as a result, the left-handed batsman brought up his half-century off just 25 balls.
Co-incidentally Warner is also celebrating his 34th birthday today.
Earlier, Delhi Capitals had won the toss and opted to bowl first.
Delhi made no changes to their lineup while SRH brought in Kane Williamson, Wriddhiman Saha, and Shahbaz Nadeem to their playing XI. (ANI)

Suicide attacker blows himself up in front of election…

Did my own stunts to prove myself: Suniel Shetty