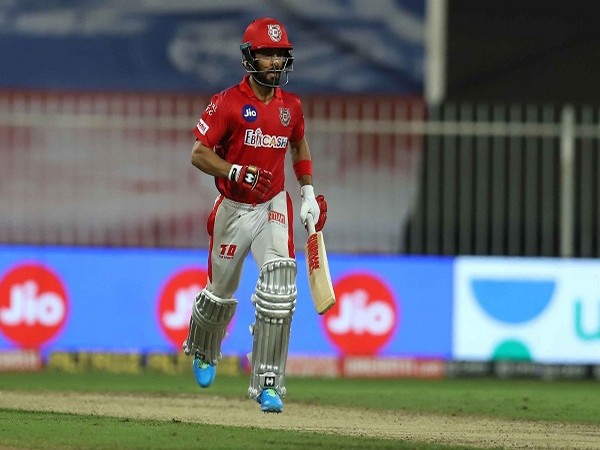 Sharjah [UAE], October 27 (ANI): Mandeep Singh, who lost his father on Friday, played a match-winning knock to guide Kings XI Punjab (KXIP) to their fifth consecutive win in the ongoing IPL and this gesture by the batsman made skipper KL Rahul both proud and emotional.
KXIP chased down the target of 150 with eight wickets in hand and seven balls to spare against KKR on Monday. Mandeep Singh and Chris Gayle played knocks of 66 and 51 respectively.
Rahul said playing like this despite such a big loss has made the team proud of the 28-year-old batsman.
“Yeah, it makes me emotional thinking about what he has been through. To have the strength and come out to perform for your team and play after such a big loss is very very difficult and that’s something I am proud of. As a team we have stuck together as a family and supported everybody,” Rahul said in a video posted on KXIP’s Twitter.
“You know when you are in a bubble and away from loved ones, so all we got it ourselves. So it’s important that you stay together and love and support each other. The strength comes from all of us and that’s something I am proud of,” he added.
With this win, KXIP has moved to the fourth spot in the points table with 12 points while KKR has slipped to the fifth spot with as many points.
KXIP has now won their last five matches in the ongoing IPL, keeping the hopes of qualifying for the playoffs alive. They will next lock horns against Rajasthan Royals on Friday, October 30 at the Sheikh Zayed Stadium in Abu Dhabi. (ANI)