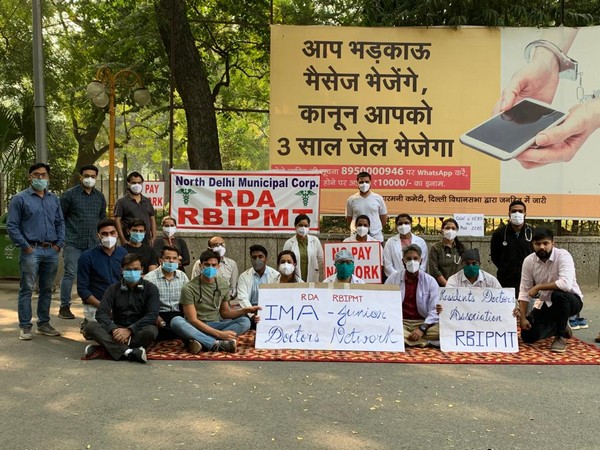 By Priyanka Sharma
New Delhi [India], October 27 (ANI): Doctors from three major central government hospitals in Delhi — Ram Manohar Lohia Hospital, Lady Hardinge Hospital, and Safdarjung Hospital — on Tuesday held a symbolic protest and wore black ribbons, demonstrating solidarity with their counterparts from North Delhi Municipal Corporation (NDMC) hospitals, protesting against the non-payment of salaries for the last few months.
The NDMC runs three big hospitals in the city — Hindu Rao Hospital, Kasturba Gandhi Hospital, and Rajan Babu TB Hospital — where the doctors haven’t been paid salaries for the last three months.
Dr Sunil Duchania, president of Resident Doctors’ Association (RDA) at Lady Hardinge Hospital, said they observed a two-hour pen-down symbolic protest in non-COVID areas, supporting the agitating resident doctors of the NDMC hospitals. “The resident doctors posted in COVID-19 prone areas continued with their medical services wearing black ribbons.”
Meanwhile, doctors of RML Hospital and Safdarjung Hospital also wore black ribbons to work.
“It is very disheartening to see that doctors posted at the MCD hospitals are not being paid their dues. The government has termed them “front line warriors” of the COVID-19 pandemic. Now see the conditions of these doctors. It is so poor. How will they run their families? We, at Safdarjung Hospital, registered our protest by wearing black ribbons,” Dr Manish, President of Safdarjung Hospital RDA, said.
Earlier on Tuesday, NDMC Mayor Jai Prakash met the striking doctors of the MCD hospitals and assured them of clearing at least a month’s salary.
“NDMC Mayor Jai Prakash has assured the release of a month’s salary by today, while the salary for another month would be released within 15 days. This time, we will not lift the strike even if we are paid a month’s salary. It is unacceptable. These are very difficult times due to the COVID-19 pandemic. The government should also see that we have our families to feed. We don’t have to beg every time to get our payment,” Dr. Maruti Sinha, General Secretary of Municipal Corporation Doctors’ Association told ANI.
He added even last time their salaries were paid only after they sat on a strike in June. “This time, we need a permanent solution and a written blueprint from the MCD about how they are going to tackle this issue in the future,” Dr Sinha concluded. (ANI)

Japan says no to drones at Tokyo Olympic venues: Report