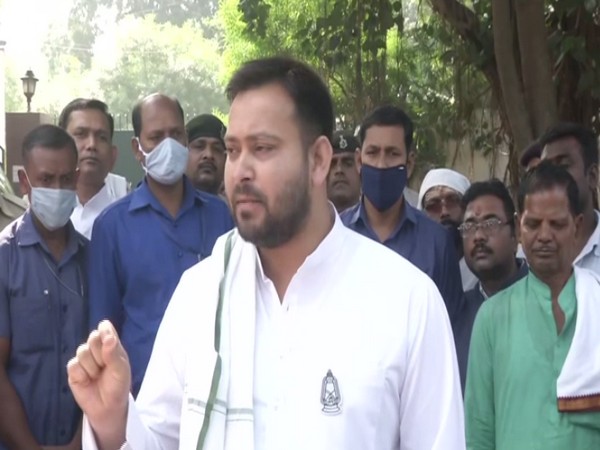 Patna (Bihar) [India], October 27 (ANI): Rashtriya Janata Dal (RJD) leader Tejashwi Yadav on Tuesday said that by commenting on my family, Chief Minister Nitish Kumar is targeting Prime Minister Modi and moreover he can only indulge in abusing me but he won’t speak on the real issues like inflation and corruption that affects people.
“By commenting on my family, Nitish Kumar is targeting PM Modi as he also has 6 siblings. Using such language, Nitish Kumar has insulted women and my mother’s sentiments. They don’t speak on main issues including inflation, corruption, unemployment etc, he can only abuse us,” said Yadav reacting to Bihar Chief Minister Nitish Kumar’s ‘nine children’ jibe at RJD supremo Lalu Prasad Yadav.
“Whatever CM Nitish Kumar says, it is a blessing for us but he is indirectly trying to target PM Modi indirectly by attacking us,” he added.
Yadav further stated that RJD’s only focus is to provide jobs to the youth, eradicate poverty, construct open factories and food processing units.
“People of Bihar have decided to vote for the issues related to the state,” he added.
Earlier today, Yadav said that the bad words used by Bihar Chief Minister Nitish Kumar against him are like “aashirwaad” (blessings) for him.
“Even bad words used by Nitishji against me are like blessings to me. Nitishji is mentally and physically tired and that is why he can speak whatever he likes. I treat his words like a blessing. This time Bihar has decided to vote on the issues of employment and development,” Yadav said in a tweet (roughly translated from Hindi).
In a veiled attack at Mahagathbandhan’s chief ministerial candidate Tejashwi Yadav, Nitish Kumar had on Monday said that some people are interested in their self-promotion and not in work. (ANI

For me, football is everything: Brazilian defender Marcelo