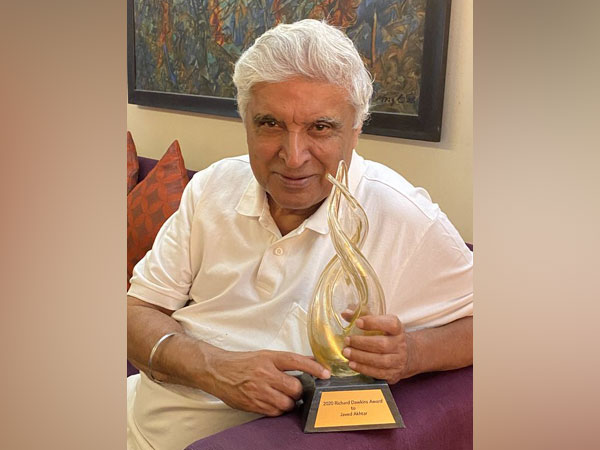 New Delhi [India], October 26 (ANI): Almost four months after being named as the recipient of the prestigious Richard Dawkins Award, senior lyricist and poet Javed Akhtar was on Monday snapped with the trophy.
Akhtar’s wife and actor Shabana Azmi took to Twitter to share the first picture of the celebrated poet with his award trophy.
“[?]@Javedakhtarjadu with his prized #Richard Dawkins 2020 Award,” Azmi tweeted along with his picture.
Akhtar and Richard Dawkins on Saturday had interacted with each other during a virtual conversation on the award.
The 75-year-old poet has become the first Indian to win Richard Dawkins Award 2020 for critical thinking, advancing human progress and humanist values.
The award, which is named after English evolutionary biologist Richard Dawkins, has been presented since 2003.
The renowned personality is conferred with the award for his “critical thinking, holding religious dogma upto scrutiny, advancing human progress and humanist values.”
The veteran lyricist and screenwriter also have five National Awards for Best Lyricist to his name and even the Sahitya Akademi Award. (ANI)

India’s eastern frontier too will be guarded by…

Verbal spat breaks out between Congress workers in…